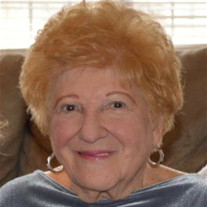 Betty Kessler Mittelman, 89, of Overland Park, KS passed away peacefully on July 11, 2018. Funeral services will be held at 11:30 am, Monday, July 16, 2018 at The Louis Memorial Chapel, 6830 Troost Ave, Kansas City, Mo 64131. Burial will follow at Sheffield Cemetery. In lieu of flowers, the family suggests contributions to ASANA Hospice or Hadassah. Betty Kessler Mittelman was the youngest of eight children born on July 7, 1929 to Sara and Charles Kessler in Kansas City, Missouri. She grew up and lived her entire life in the community, attending Central High school and being raised as much by her older siblings as her parents. Still in her teens, she met the love of her life, Geniek (Jack) Mittelman, at a social club party and they were married not long after. They had their first daughter, Cheryl, a year into their marriage. Their second daughter, Michele, followed in four years and their only son, Roger, was born two years later. They remained in Kansas City where Betty helped her husband establish a successful alteration business. Betty worked alongside her husband handling all the business transactions and transporting alterations to and from the Jones Store Company, as he did the tailoring for the local department store. Along with her business responsibilities, Betty became involved in community service work. She was a lifetime member of Hadassah and was intimately involved for many years in the Marcella Rodin Club, where she was a board member and president. The Marcella Rodin Club provided medical equipment to individuals and local hospitals. She was active with her youngest daughter’s Girl Scout Troop, even chairing the annual cookie drive. As the children grew up, she found a part time job with DeCloud Studios working on school photos. She enjoyed this experience and making new friends. Later in life, she took up ceramics and played Pan and poker with her friends. She loved nothing more than a good card game and was a fierce competitor. Betty was a sweet and loving person who never had an unkind word for anyone. She so enjoyed spending time with her family, her three adored grandchildren and her four great-grandchildren. She was preceded in death by her parents, her beloved son, Roger, and husband, Geniek. She leaves behind her daughter, Cheryl (Cary) Glass; daughter, Michele (Jeffrey) Smith; grandson, Evan (Leah) Glass; granddaughters, Shana (Ray) West and Ryan (Jesse) Parley and her great-grandchildren: Jackson, Aaron, Asher and Alden. She will be missed by her many nieces and nephews, her family and friends.

The family of BETTY MITTELMAN created this Life Tributes page to make it easy to share your memories.