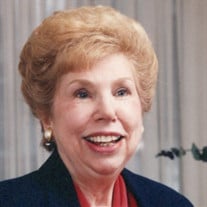 Betty Wacknov Price November 26, 1925 – November 28, 2014 Our sweet mother, grandmother, bubbie, aunt, sister and friend, Betty Wacknov Price, passed away on Friday morning, November 28, 2014, two days after her 89th birthday. Funeral services will be held on Sunday morning, November 30, at 10:00 a.m. at Louis Memorial Chapel. Burial will be at Mount Carmel Cemetery with lunch following at the home of Betty’s daughter and son-in-law, hosted by her children, grandchildren, and great-grandchildren. Betty was the third of six children and was born on Thanksgiving day, November 26, 1925, in Kansas City, Missouri, to Sadie and Alex Wacknov. She attended Kansas City Missouri public schools and graduated from Central High School in 1942. Betty attended Kansas City Junior College and worked in her family’s business, American Wiper and Waste Mills, now American Textile. She was a whiz with numbers and continued to balance her checkbook down to the last penny without using a calculator last month! In 1946, Betty’s cousin, a matchmaker extraordinaire, Madeline Koenigsdorf, introduced her to a dashing young Sooner from Miami, Oklahoma. Elmer Price was Bob Koenigsdorf’s fraternity brother, a Phi Beta Delta at OU, and Betty was smitten! On their first date, they went to the Plaza Theatre for a movie but left shortly after the show started and spent the entire evening at Putch’s 210, getting acquainted. Betty and Elmer married in 1948 at her parents’ home on 56th Street. They enjoyed a lifelong friendship with the Koenigsdorf family, the Leskys, the Bells and the Dorfmans, and together, they celebrated many New Years’ Eves and lifecycle events. Elmer started a textile distribution business, American White Goods Company, and Betty was a stay-at-home mom with their three children, Gayle, Marc and Louis. She loved cooking and participating in their children’s activities including Cub and Boy Scouts, Brownies, Girl Scouts and PTA. Betty had a lifelong love of learning and rediscovered her Jewish heritage, which was ingrained by her parents, in the early 60’s. She returned to college and graduated from UMKC with a degree in Judaic Studies. She was a proud Hebrew and Sunday School teacher at several area congregations, including Kehilath Israel Synagogue, where her father, Alex, was a founding member. She loved Judaism with a passion, kept a kosher home and let her faith be her guide through every decision, big and small. She was loyal to a fault, a kind and sweet soul, and her grandchildren and great-grandchildren were her pride and joy! Betty hosted many memorable family gatherings at her home, which was always full of love. After Elmer passed away in 2010, Betty moved to The Atriums where she was treated like royalty by Lucille and her marvelous staff. She loved the yummy mealtimes, the ice cream parlor treats, Shabbat Services and movies. She was a true-blue Royal fan and watched every game, this and every season. She treasured her Friday afternoons with Edith, her friend and hairdresser. Her family is extremely grateful to Dr. Harish Ponnuru, who cared for her like she was his family and to Randy Bloch and the wonderful caregivers at Enhanced Health Care. Betty was predeceased by her parents, Alex and Sadie, her husband, Elmer, and her brother and sister-in-law, Natalie Wacknov and Leonard Wacknov. She is survived by her beloved brothers and sister and their spouses and partners: Paul Wacknov and Marilyn Hoffman, Donna and Sam Zavelo, Myrna and Jerry Wacknov and Chris and David Wacknov. She leaves her children and their partners: Gayle and Bruce Krigel, Marc Price and Leslee Gottlieb, and Louis Price and Durwin Rice; her grandchildren: Shanti and Eliyahu Krigel, Emily and Todd Spector, Ashley Jonas, Evan Price and Jenny Rubin, Alex Price, Stephanie and Jeffrey Krigel and Aaron Price; and her great-grandchildren: Isaiah Kavod Moshe Krigel, Kaela Grace Krigel, Jack Fox Jonas, Arlena Price Jonas, Amelia Rose Krigel and Zoey Lillian-Kaye Spector; along with many wonderful and precious nieces, nephews and cousins. Betty was a kind and gentle person. She always accepted what life presented her without complaint. Betty was never demanding and never said a cross or unkind word about anyone. She was always the peacemaker in the family, a trait that she learned from her mother, Sadie. Betty was very practical, and although she thought flowers were beautiful, she did not think they were a wise expense. If you would like to make a donation in her memory, Kehilath Israel Synagogue was very important to her along with the Jewish Community Center, where she was recently recognized as 2014’s longest standing member, or please feel free to make a contribution to a charity of your choice.

The family of Betty W. Price created this Life Tributes page to make it easy to share your memories.