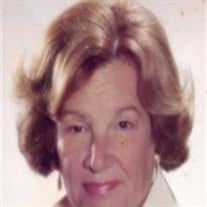 Betty Harvey Slegman, 89, of Mission Hills, Kansas, passed away at the home on Tuesday, October 25. Betty was preceded in death by her husband, Robert Morris Slegman; her daughter-in-law, Holly Franking Slegman; and her brother, Gerald Harvey. Funeral services will be held at 2:00 p.m., Friday, October 28, at The New Reform Temple, 7100 Main Street, with a burial following the service at Rose Hill Cemetery. In lieu of flowers, the family requests that contributions be made to the Girl Scouts, 8383 Blue Parkway, Kansas City, MO 64133; MAINstream Coalition, 5960 Dearborn, Suite 213, Mission, KS 66202; and Johnson County Community College, 12345 College Blvd., Overland Park, KS 66210. Betty was born in New York, New York, on August 19, 1922, the daughter of Dorothy and Gerald Horvitz. She grew up in Woodmere, New York, attended Woodmere Academy and graduated from the University of Michigan, where she edited the women's page of The Michigan Daily, the only morning paper in Ann Arbor. In 1944, she started working at United Press, where she was part of the radio division of the news department. Betty's most exciting story came the day the atom bomb was dropped on Hiroshima. Her father, a noted scientist and engineer, once told her that the country that developed the atom bomb would rule the world. She told her editor what her father said, and he told her to "write it big!" This was a defining moment in Betty's career. As a reward, she was promoted to the features desk. One of her features was "The World of Tomorrow." Her boss recommended her to fly on Trans World Airlines' Constellation for a glamorous, two-day press trip to introduce the new airplane in 1946. Even though it was a bumpy flight, the "Connie" flew coast-to-coast in seven hours and 27 minutes, setting a new transcontinental record. Betty met her future husband, Robert, the love of her life, after visiting her aunt and uncle, Hortense and Leon Bloch in Kansas City. She was involved in political causes: she fought against intolerance and hate groups such as The John Birch Society, was a member of the political grass roots group, The Wheels, and was a passionate advocate for gun control. Betty was a long-time member of her study group through the National Council of Jewish Women, was the president of the PTA at Shawnee Mission East, was a co-founder of The New Reform Temple, served on the board of the Mid-Continent Council of Girl Scouts, was vice president of the American Field Service of Kansas City, served on the boards of the Y.W.C.A, Menorah Medical Center Auxiliary, Jewish Family and Children's Services, and was a founding board member of Kansas City Young Audiences. She was a freelance writer and was a partner in the public relations firm, Slegman/Laner, promoting writers and doing special events for Saks Fifth Avenue. Betty was a member of Oakwood Country Club and the Yacht Club in Palm Beach, Florida. Betty had a kind, generous heart up to the very end and thought that her family and friends were "the best." She is survived by her three children, John Slegman: Dorothy Slegman and her husband, Jim Brewer, and their children Sam, Casey and Bronwyn, Minneapolis/St. Paul, Minnesota; Ann Slegman Isenberg and her husband, Tom Isenberg, and their children, Kate and David, Kansas City; her brother and sister-in-law, Roger and Ellen Harvey, Woodmere, New York; and her special "cuzoo" Helen Bernstein Fealy, New York, New York, and Palm Beach, Florida; and many beloved nieces, nephews and cousins. Special thanks and love go to her marvelous caregivers and helpers: Dyana McGee, Brenda Roberson, Eva Trober, Rita Meeker, LaShonda Dixon, T'Shanna Goodwin, Irene Washburn, and all the amazing people at Crossroads Hospice.

Betty Harvey Slegman, 89, of Mission Hills, Kansas, passed away at the home on Tuesday, October 25. Betty was preceded in death by her husband, Robert Morris Slegman; her daughter-in-law, Holly Franking Slegman; and her brother, Gerald Harvey.... View Obituary & Service Information

The family of Betty Harvey Slegman created this Life Tributes page to make it easy to share your memories.