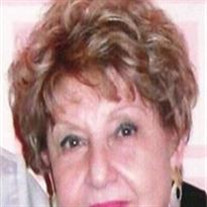 Betty Marie Levitt, 88, passed away Wednesday, September 25, 2013 at Sunrise of Overland Park. Graveside services 1:30pm Friday, September 27, at Rose Hill Cemetery. Kindly omit flowers; the family suggests contributions to The Temple, Congregation B’nai Jehudah, Hadassah or a charity of your choice. Betty was co-founder and secretary-treasurer of United Bakers Supply Co, which she and her husband Harold founded in 1962. Betty retired from the business in 1994. Harold her loving husband of 65 years preceded her in death in 2010. They previously owned Levitt’s Superette, from 1946 to 1952 and U.S. Toy Co, from 1952 to 1962. Betty attended the University of Missouri – Kansas City. She was a past Girl Scout leader and a life member and past president of Hadassah, Group IV. She was a member of The Temple, Congregation B’nai Jehudah and its sisterhood, Friends of the Zoo, the National Council of Jewish Women, Nelson-Atkins Museum Friends of Art, The National Holocaust Memorial Museum, MADD, ASPCA and The Humane Society of the United States. She was also a member of Meadowbrook Country Club. Betty is survived by daughters and sons-in-law: Susan Dolginoff, Alexa and Michael Berman, all of Overland Park, Lynda and Ed Caviar, Scottsdale, AZ; grandchildren: Stephen Dolginoff, Lori Dolginoff, Jason Berman and his wife Kafui, all of New York City, Adam Berman and his wife Anna, Kansas City, MO, Brad Caviar and his wife Heather, Joey Caviar and his wife Amy, all of Phoenix, AZ; great-grandchildren: Payton, Jordyn and Hunter Caviar, Kalin and Jacob Caviar, Jaiden and Zoe Berman. A special thanks to Betty’s caregiver Kwesi Lisso.

The family of Betty Marie Levitt created this Life Tributes page to make it easy to share your memories.