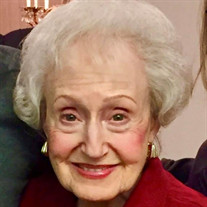 Beverly J. Friedman, beloved Mom, Grandmother and Great-Grandmother passed away peacefully and surrounded by her family at Village Shalom on March 22, 2022, two days after her 97th birthday. Born March 20, 1925, in Kansas City, Missouri, she was the daughter of the late Minnie (Kletsky) Hakan, Jacob (Jack) Goldberg & stepfather Dr. Albert J. Hakan. She was also the sister of the late Robert (Bobby) Donald Goldberg who died overseas serving in WWII. Beverly was a graduate of Paseo High School where she was a member of Zeta Kappa sorority. She maintained close friendships with many of her sorority sisters and their future husbands who became life-long "club" friends. Beverly met her husband, Bob (the late Robert R. Friedman), while still in high school. A friend of her older brother, Bob was training for his pilot's license. After a few dates he convinced her to go flying with him and, after that, literally swept her off her feet. They married in 1943, had two daughters, Nancy and Donna, and enjoyed a long and loving marriage for nearly 69 years until Bob passed away in 2012. As a native Kansas Citian, Beverly knew or seemed to be related to most of the local Jewish community. Her daughters fondly recall how eating out, running mundane errands or especially shopping on the Plaza with their mom took much longer than expected because Beverly stopped to chat with all the friends and people she knew. Beverly had an active social life and enjoyed playing Mah Jongg, card games and Rummy Q. She and Bob enjoyed ballroom dancing, going on cruises and travelling. They regularly got together with their "club friends" in each other's homes or dining out to celebrate birthdays and anniversaries. Beverly is survived by her daughters, Nancy Reichman (Allan) of Overland Park, Kansas and Donna Hess (Steve) of Briarcliff Manor, New York; four beloved grandchildren, Mara Reichman Lambert (Mark) of Adelaide, Australia, Michael Reichman (Elizabeth Erenberg) of York, Pennsylvania, Warren Hess (Liz) of Elmsford, New York and Leah Hess Bellman (Miles) of Framingham, Massachusetts; and three great-grandsons (her "angel babies"), Robin Robert Reichman, Lucas Andrew Bellman and Alexander Brooks Hess. The family wishes to thank all Beverly's private caregivers for their extraordinary love and dedication, both in her home and at Village Shalom, plus the Memory Care staff at Village Shalom for their kindness and exceptional care. Graveside services will be at 11:30am Friday, March 25, 2022 Rose Hill Cemetery, 6900 Troost Ave., Kansas City, MO. For those wishing to attend by Zoom, please email [email protected] for Zoom link and passcode. Beverly was a member of The Temple, Congregation B'nai Jehudah and her family requests donations to the Temple, Village Shalom or Kansas City Hospice in lieu of flowers.

The family of Beverly J. Friedman created this Life Tributes page to make it easy to share your memories.