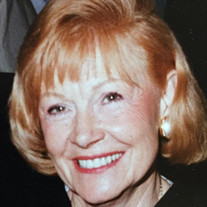 Bonnie Adkinson Wacknov, 85, beloved Mother, Nonny and sister, passed away June 21, 2016 in Scottsdale, AZ surrounded by her loving children and was laid to rest on June 26, 2016 at Mount Carmel Cemetery in Kansas City. Born to Clifford and Maxine Adkinson in Lawrence, KS on August 15,1930, a lifelong Kansas City Chiefs fan, Bonnie epitomized style, grace and had an unparalleled zest for life. A dedicated worker, her employment history included her first job at Katz' Drug Store in KC, KS in 1942, Woolf Brothers downtown and Chasnoff's on the Plaza, where her keen eye for fashion and style were developed. She later worked for American Textile Mills, Marche Gourmet in Scottsdale, and the Donna Dodson Collection. Happy to volunteer wherever needed she was a lifetime member of Hadassah and lovingly served on the National Council on Alcoholism (now NCADD) and as a volunteer for the Phoenix Art Museum. She was a Boy Scout Den Mother as well as adored Leader of Girl Scout Troop 928. As a friend of Bill W, Bonnie’s firm faith in God enabled her to realize one of her proudest accomplishments when she received her 33 year anniversary chip on Mother's Day in May. Bonnie's special touches and passion for cooking and entertaining guaranteed that even the simplest moment became a celebration of life and love. She will be remembered most of all for her passionate devotion to her family, friends and those she held dear. She is survived by her adored children Dennis and Larue Wacknov of Lenexa, Lisa and Peter Bellis of Cave Creek, AZ, and Susan and Greg Jones of Scottsdale; ex-husband, Paul Wacknov of Leawood; sister and brother-in-law, Joy and Frank Graziano of Overland Park; grandchildren, Stacey Wacknov and Steven Gross of Phoenix, AZ, Jason Wacknov and Marci Curliss of Lee’s Summit, Lauren Hansen of Tempe, AZ, Brandon Jones and Ali Iannolo of Columbia, MD, Corey Wacknov and Maggie Duggan of Kansas City, and Stefani Jones of Washington, D.C.; four great grandchildren and countless nieces and nephews, both related by blood and by spirit. She was preceded in death by her beloved son, Craig Wacknov. The family suggests donations in Bonnie’s loving memory be made to The Crossroads 4201 N. 16th Street, Suite 110, Phoenix, AZ 85016.

Bonnie Adkinson Wacknov, 85, beloved Mother, Nonny and sister, passed away June 21, 2016 in Scottsdale, AZ surrounded by her loving children and was laid to rest on June 26, 2016 at Mount Carmel Cemetery in Kansas City. Born to Clifford and... View Obituary & Service Information

The family of BONNIE JOYCE WACKNOV created this Life Tributes page to make it easy to share your memories.