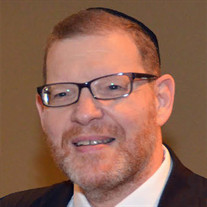 Brian Allan “Boruch Aharon” Salvay, 61, of Woodridge NY, passed away Wednesday evening, March 11, 2015 (21 Adar 5775), at Orange Regional Medical Center in Middletown, NY after a one-year battle with myelofibrosis / leukemia. Burial took place Thursday afternoon, March 12, at Chevra Kadisha of Monsey cemetery in Spring Valley, NY. Memorial contributions may be made to the charity of one’s choice. A memorial (shiva) service will be at 7:00 p.m. Tuesday, March 17, at Village Shalom in Overland Park KS. Brian was born June 12, 1953, in Kansas City MO, where he attended Pinkerton Elementary School. He finished his elementary education at Belinder Elementary School in Prairie Village KS, and continued to Indian Hills Junior High School in Prairie Village KS, where he was Student Council President (1967-68). He graduated from The Pembroke-Hill School, Kansas City MO, in 1971. A lifelong philosopher and a student in many academic areas, he received two bachelor’s degrees in four years from the University of Pennsylvania in 1975: B.S. in Economics cum laude from The Wharton School of Business, and B.A. in Sociology cum laude from the College of Arts and Sciences. While at Penn, Brian spent his junior year at the Hebrew University in Jerusalem where he continued his studies in economics and sociology, and added courses in Judaic Studies and History. Brian earned his Juris Doctor from the University of Kansas in 1978 where he made time to be director of the Hillel Foundation for Jewish Campus Life. He and Loretta Goodman of Malden MA were married June 18, 1978. After practicing law in Overland Park KS, from late 1978 until early 1981, he moved with his wife and their first child, Naftoli, to Monsey NY. There, Brian established Platinum Abstract and Title Corp., whose work was underwritten by Old Republic National Title Insurance Co., Richmond VA. His agency had a multi-million dollar commitment limit based on Brian’s competence, integrity and diligence. Brian was drawn to theology and practice of Orthodox Judaism from the time he began attending religious school at Congregation Beth Shalom in Kansas City, where he was bar mitzvah in 1966 and confirmed in 1969. While still in high school, he served as a counselor at Camp Ramah in Wisconsin. He was a member of the Orthodox Jewish communities in Overland Park KS, and in Monsey and Woodridge NY. Brian had an extraordinary memory and would find himself humbly conversing with rabbis and Judaic scholars on subjects for which his own citations were not only valid, but for which he could precisely reference the sources. The combination of his high intelligence and persistence made him a formidable debater of philosophy and theology. He was preceded in death by his father, Seymour Nathan Salvay (2009), and a brother, Steven Howard Salvay (2004). He is survived by his wife of 36 years, Loretta “Miriam” Goodman Salvay of Woodridge NY; his mother Geraldine “Gerry” Salvay of Overland Park KS; his brother Craig Salvay and wife Linda, of Prairie Village KS; his sister-in-law Helen Salvay, of Centennial, CO; Brian’s children: son Naftoli Pesach Salvay and daughter-in-law Sarah of New Hempstead NY, and their children (Shirel Leah Levy, Meira Batyah, Moshe Chaim, Tehila Bracha, and Aviel Yosef Aharon born March 8, 2015); son Yosef Eliyohu Salvay of Woodridge NY; son Binyomin Eliezer Salvay of Woodridge NY; daughter Naomi Shira Fruma Salvay of Woodridge NY, and her daughter (Thalia Shira); son Shmuel Yissochor Dov “Sam” Salvay and his fiancée Lauren McLachlan of Wallkill NY; son Levi Zechariah Salvay and daughter-in-law Chana Rochel of Brooklyn NY, and their children (Yosef Asher and Yehuda Aryeh); son Yisroel Meir Yehuda Salvay of Woodridge NY; daughter Esther Manya Salvay of Monsey NY. He also leaves uncles Melvin Eugene “Gene” Salvay of Encino CA, and Edwin “Ed” Krigel of Overland Park KS; his AFS exchange-student brother from Chile, Carlos Perez and his family; and many loving nieces, nephews, cousins and friends.

The family of BRIAN ALLAN SALVAY created this Life Tributes page to make it easy to share your memories.