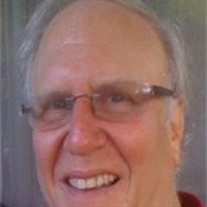 Byron C. Cohen, 72, of Kansas City, MO, passed away Friday, May 10, 2013. Funeral services will be 10:30am Monday, May 13, at The Louis Memorial Chapel, 6830 Troost Avenue, Kansas City, MO 64131, with burial to follow at Mt. Carmel Cemetery. In lieu of flowers, the family requests contributions to the Charlotte Street Foundation, 1000 W. 25th St., Kansas City, MO 64108, to support Kansas City arts or a charity of one’s choice. Byron was born January 20, 1941 in Kansas City, MO. The son of Thomas and Dorothy (Moskovitz) Cohen, he was a lifelong area resident, graduating from Pembroke Country Day School, then Columbia University in New York City, in 1963. His early career was in real estate development retiring in the 1980’s to follow his love of art. Passionate about art, Byron devoted much of his time to further our community’s interest in the arts. He began as a member and later president of the Young Friends of Art at the Nelson-Atkins Museum, and an active board member at the UMKC Gallery of Art. Byron was a founding member and first president of the Contemporary Art Society. He was instrumental in bringing to Kansas City the “Wrapped Walkways”, by Christo, in Loose Park. As a pioneer in what is now the Crossroads Art District, Byron opened the Cohen/Berkowitz Gallery in 1994, which then became the Byron C. Cohen Gallery for Contemporary Art. Byron was a long time member of Congregation Beth Shalom, member of The Temple, Congregation B’nai Jehudah, and was a member of the Oakwood Country Club. His hobbies included being an avid golfer and an amateur magician. He was preceded in death by his parents and his brother, Jordan Cohen. Byron is survived by his wife of 45 years, Eileen Cohen, of the home; son and daughter-in-law: Mark and Gaye Cohen; daughter and son-in-law: Toma and Andy Wolff, all of Mission Hills, KS; grandchildren: Jake, Elliot and Danielle Cohen; Simon and Ava Wolff; brothers-in-law and sisters-in-law: William and Janet Eaglstein, Palo Alto, CA; Fred and Sue Eaglstein, Jacksonville, FL; Robert Levinson, Miami Beach, FL; also surviving are nieces, nephews and cousins. His infectious laugh, sense of humor, sweet disposition and positive attitude will be remembered by all who knew him.

The family of Byron C. Cohen created this Life Tributes page to make it easy to share your memories.