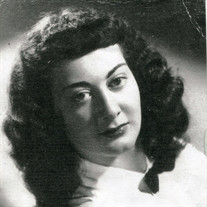 Charlene Meltzer, 90, of Leawood, Kansas, died Saturday at 1:23 AM on January 4, 2020. A service will be held at 2:00 p.m. Tuesday, January 7 at the Yukon Chapel at Mt. Carmel Cemetery, 5529 Ditzler, Raytown, MO 64133 with burial to follow. Shiva services will be held at 6:30 pm Tuesday evening, January 7 in the Leawood Room at Town Village-Leawood, 4400 W. 115th Street, Leawood Kansas 66211. In lieu of flowers, contributions can be made to the Jewish Food Pantry, The State Historical Society of Missouri, or an organization of one's choice. Charlene was born August 17, 1929 to the late Louis A. and Anna Lee (Lewis) Grossman, in Kansas City, MO. She graduated from Paseo High School in 1947 where she had been active in the Pan-American League, El Ateneo, and Freshman Induction clubs. She served on the Student Council and was a member of the Honors Club. After high school, Charlene attended The University of Missouri at Columbia where she majored in Spanish and minored in French. She was a member of the Association of Women Students (A.W.S) and the Inter-American Club. In addition, Charlene served as President of Phi Sigma Sigma sorority for 2 years and was active in the Woman’s Pan-Hellenic Society. Charlene graduated in 1950 with a Bachelor of Arts degree and was listed in the Who’s Who of American College Students for that year. After graduation she worked at the offices of the Federal Aviation Administration in Kansas City until her marriage to Norman Irving Meltzer on February 24, 1952. They began their long, loving, 65-year marriage at Beth Shalom Synagogue in Kansas City. Daughter Sydnie was born during their brief stay in Kansas City. Norman’s job soon relocated them to Chicago where Carole was born. Eventually, the family settled in St. Louis where Charlene found early employment with S&H Green Stamps. Later, she was a substitute teacher in the University City and Ladue School Districts. In 1965 she become Executive Assistant at Psychological Associates in Clayton, MO and held that important position for 40 years until her retirement in 2005. Charlene was an active member and lay leader of the congregation at Temple Shaare Emeth in St. Louis. She volunteered as a parent leader when her daughters were in religious school, served as an adult education group leader for many years, and led numerous Sisterhood retreats. Through the temple’s community service activities she helped build Habitat for Humanity homes, worked as a Christmas Day volunteer at St. John’s Hospital gift shop, and made cloth toys that were distributed to St. John’s newborns. After retirement, Charlene and Norman took road trips throughout the United States, and joined Shaare Emeth friends for cruises to tropical islands and travels in many foreign countries. In their later years the couple returned to Kansas City, setting up house in Hawthorn Terrace and becoming members of The Temple, Congregation B’nai Jehudah. When they downsized to Town Village –Leawood, they re-established close relationships with extended family and many original school friends residing there. Charlene was preceded in death by her parents, husband, and brother Gale Irving Grossman. She is survived by two daughters: Sydnie Kleinhenz of Fayetteville, Arkansas, and Carole (Ronald) Goggin of Rolla, Missouri; six grandsons, Casey (Andrea) Kleinhenz, Mickey Kleinhenz, Jamey (Danielle) Kleinhenz, Danny Kleinhenz (Jordan Green), Tim Kleinhenz and Jacob Goggin; three great-grandchildren, William Kleinhenz, Matilda Kleinhenz, and Tucker Kleinhenz; sister-in-law Maxine Grossman; brother-in-law Arthur (Marlene) Meltzer, many nieces and nephews; and her loving caregivers Patricia Alm, Danielle Johnson, Kimiko Johnson, and Tay Johnson. The family expresses their deepest thanks to Kansas City Hospice for their support in Charlene’s final days.

The family of Charlene Rhea Meltzer created this Life Tributes page to make it easy to share your memories.