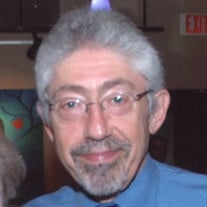 Charles Megerman, 67, of Overland Park, KS, passed away Monday, July 14, 2014 at his home. Funeral services will be at 1:00pm Tuesday, July 15, at The Louis Memorial Chapel with burial to follow at Sheffield Cemetery. In lieu of flowers the family suggests contributions to Beth Israel Abraham & Voliner Synagogue or the Jewish National Fund. Charles was born March 22, 1947 in Paris, France, the son of Joseph and Sarah (Winerib) Megerman and moved with his family to New York in 1951 at the age of four. His mother survived Auschwitz and was liberated by the Russian Army. His father was in a prisoner of war camp in Germany and was liberated by the United States. They then met in France. Charles received his BA in English Literature from Park University in 1968. Charles then received his Master’s Degrees in English Literature, Counseling and Guidance and Public Administration from UMKC. He was a licensed Psychologist in the State of Missouri. After graduating college, Charles served as a Vista Volunteer in Chicago for two years. He worked for the Jackson County Department of Corrections for twenty-three years and eventually became Executive Director of the Jackson County Jail for thirteen of the twenty three years. After leaving the Jackson County Jail, he went to work for the Kansas City Community Center (substance abuse & offender reintegration), for fifteen and a half years. Charles was a proud liberal Democrat and a diehard Yankee’s fan. He was a member of Beth Israel Abraham & Voliner Synagogue. He loved jogging and exercise in general, loved to fish, vegetable gardening, chess, was an avid reader, enjoyed movies, and loved cruises and other travel, particularly to Hawaii and Israel. Charles was a dedicated blood donor, donating nearly eleven gallons, because, in his words, “it was easy to do and helped a lot of people.” He was a good griller of hamburgers, steak, chicken, hot dogs and vegetables. Charles was preceded in death by his parents. He is survived by his wife of 44 years, Esther Megerman; daughters and sons-in-law: Rachel and Michael Coleman, Kansas City, KS; Eliana Megerman and Michael Merdinger, Modiin, Israel; Shira Megerman, Gainesville, FL; son and daughter-in-law: Joseph and Alice Megerman, Overland Park, KS; brother and sister-in-law: Jacques and Susan Szaluta, Westbury, NY; grandchildren: Mikey, Aaron and Allen Coleman; Nehemiah, Lital and Ariella Merdinger; Golda Megerman and his mother-in-law: Taisa Simon.

Charles Megerman, 67, of Overland Park, KS, passed away Monday, July 14, 2014 at his home. Funeral services will be at 1:00pm Tuesday, July 15, at The Louis Memorial Chapel with burial to follow at Sheffield Cemetery. In lieu of flowers the... View Obituary & Service Information

The family of Charles Megerman created this Life Tributes page to make it easy to share your memories.