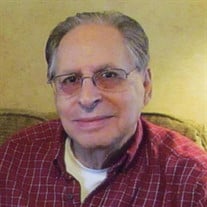 Charles L. Tigerman, 89, of Overland Park, Kansas passed away peacefully on March 31, 2021. Private family services will be held. In lieu of flowers, contributions may be made in Charlie’s memory to a charity of one’s choice. Charles was born May 27, 1931 in Minneapolis, Minnesota to the late James S. and Hazel (Frisch) Tigerman. When Charlie was just 3 years old, the family moved to Kansas City, MO. This is where Charlie grew up, graduating from Southwest High School in 1948 and continuing his education at Kansas City Junior College in 1950. On November 30, 1951, Charlie enlisted in the US Air Force. He served at Scott Air Force Base in Illinois and then served at Ramstein Air Force Base in Germany, near Kaiserslautern. While serving in Germany, Charlie met Ruth Theobald. They were then married on November 5, 1955 in Kaiserslautern, Germany at a US Military Chapel. After being honorably discharged in January of 1956, Charlie and Ruth returned to Kansas City where they spent the better half of 60 years together. Charlie held various jobs for a few years before going to work for the US Postal Service. Charlie was a devoted mail carrier until his retirement in 1989. For 23 years, with his wife Ruth, Charlie volunteered at Shawnee Mission Medical Center. He was a proud member of the American Legion Post 370, and a member of the Letter Carriers Union Branch 5521. Charlie was also a long time member of The Temple, Congregation B’nai Jehudah. In addition to his parents, Charlie was preceded in death by his wife, Ruth. He is survived by his niece and her husband: Janice and James Hodes; nephews and their wives: Rick and Cindy Glass, Randy and Diane Glass; and eight grandnieces and grandnephews.

Charles L. Tigerman, 89, of Overland Park, Kansas passed away peacefully on March 31, 2021. Private family services will be held. In lieu of flowers, contributions may be made in Charlie&#8217;s memory to a charity of one&#8217;s choice. Charles... View Obituary & Service Information

The family of Charles L. Tigerman created this Life Tributes page to make it easy to share your memories.