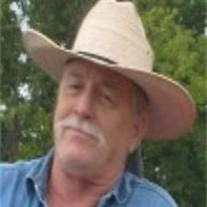 Chuck Johnson-Pickett, 64, of Stilwell, KS, passed away Friday, April 1, 2011 at his home. Graveside services will be 2:00pm Monday, April 4, at Rose Hill Cemetery. Kindly omit flowers. The family suggests contributions to the Juvenile Diabetes Research Foundation. Chuck spent his career in the U.S. Army where he was a helicopter test pilot, served in the Vietnam Conflict where he was awarded the Distinguished Flying Cross, and retired in 1989 as a Chief Warrant Officer after serving his country for 21 years. He then went to work for the BNSF Railroad, where he worked for 12 years as a Conductor and Engineer before retiring in 2010. Chuck received his B.S. in Aviation Management and was a proud member of the United Transportation Union. He was preceded in death by his father, Charles Breedlove Pickett and a son, Gordon Charles Pickett. Chuck is survived by his wife of 29 years, Janie Johnson-Pickett; son: SSgt. Karl Johnson-Pickett, Emporia, KS; daughters and son-in-law: Michelle Pickett Matheson and her husband, Mick Matheson, Monroe, WA; Hannah Johnson-Pickett, Manhattan, KS; mother: Xenia Skaggs, Vancouver, WA; brothers and sisters-in-law: Tom and Pat Pickett, Vancouver, WA; Steve and Sondra Pickett, Camus, WA and 3 granddaughters: McKenna, Marissa and Matilda Matheson. Chuck was a much loved husband, father, grandfather, and friend. He will be missed by all.

The family of Charles "Chuck" Johnson-Pickett created this Life Tributes page to make it easy to share your memories.