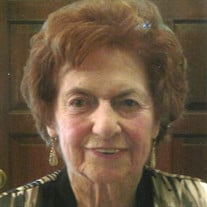 Charlotte Fink, 97, of Overland Park, KS, passed away Tuesday, February 11, 2020 at Garden Terrace of Overland Park. Funeral services will be 11:00am Thursday, February 13, 2020 at The Louis Memorial Chapel, 6830 Troost Avenue, Kansas City, MO with burial to follow at Rose Hill Cemetery. In lieu of flowers, the family suggests contributions to the Alzheimer’s Association or the American Diabetes Association. She was born August 26, 1922 in Providence, RI, the daughter of Samuel and Celia (Silverman) Galkin and moved to Kansas City in 1951. Charlotte was a “Rosie the Riveter” during WWII. She met her future husband, Bertram Fink, at a USO dance and played steel guitar in a girls band. Charlotte began working in 1958 and retired in 1998 from a career in various capacities and stores in retail. Every Sunday, the whole family got together for dinner – she was known for her spaghetti. Charlotte was very active and would go to the gym twice a week. She loved to read, play poker, dominoes and spend time with her family and grandchildren. Charlotte was the biggest sports fan in her family and taught her son Terry how to play baseball. She also loved to go to the Casino’s. Charlotte was a member of The Temple, Congregation B’nai Jehudah. She was preceded in death by her parents; her husband of 61 years, Bertram, her sister, Estelle DeFusco and her brother-in-law, Louis DeFusco. Charlotte is survived by her daughter, Carol Peltzie; son and daughter-in-law, Terry and Ruth Ann Fink; grand-children: Craig and Suzanna Peltzie, Stacey and Robert Winning, Daniel Fink, Debbie and Joshua Lawson and Rebekah and Jeremy Liberman; great-grandchildren, Aidan Winning, Evan Winning, Sebastian Lawson, Samara Lawson and London Liberman.

The family of Charlotte Fink created this Life Tributes page to make it easy to share your memories.