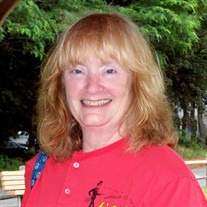 Cheryl Lynn Blumenthal Olvera, 70, died peacefully in her sleep on June 14, 2020, at her home in Olathe, KS. Private family services will be held. She is survived by her husband, Henry Olvera; her sister, Marilyn (Peter Grisafi) Blumenthal; and her brothers Joel (Linda Nylen) Blumenthal; Gary (Liane Leshne) Blumenthal; and Steven Phillip Blumenthal. She is also survived by her niece, Elizabeth Rose Blumenthal, and her nephews Scott Blumenthal and Benjamin, Alexander, and Daniel Blumenthal. She is preceded in death by her parents, Edward and Blanche (nee Lipsky) Blumenthal. Cheryl was born in Kansas City, Missouri, at Menorah Hospital on Sept. 16, 1949. She graduated from Shawnee Mission East High School in 1967 and attended Park College. Known for her creativity and outstanding writing skills, she graduated cum laude in 1971 with a B.A. in literature. Cheryl pursued a successful career in market research, working first in Texas and then in California, where she met Henry in 1984. The two were married in 1988. Cheryl’s greatest passion in life was caring for the beloved Golden Retrievers she and Henry considered their children: Bob Gates, Frank Gates, and Wyatt Earp Gates. The couple chose those names to pay homage to their favorite barbecue sauce. During their years in California, Cheryl loved nothing more than walking Bob around the beautiful Lake Elizabeth with a group of other dog owners who became lasting friends. Cheryl relished the love and attention Bob received and also the happiness he evoked in others. Wanting to share that love, she trained Bob to become a therapy dog. Cheryl's experiences were later detailed in a book that was published about the lake. In addition to their dogs, Cheryl shared Henry’s passion for the San Francisco Giants. She never stopped cheering for her hometown Kansas City teams, however, and was thrilled when the Chiefs won the Super Bowl not long after she and Henry moved to Olathe. A devoted guardian to her brother Steven, who has autism, Cheryl advocated fiercely on his behalf. She spoke out on behalf of other vulnerable groups, as well, motivated by a strong sense of civil justice, and she joined her loving sister, Marilyn, every year for walks on behalf of cancer prevention and autism research. Cheryl will be dearly missed by her family and the numerous friends whose lives she touched. In lieu of flowers, donations may be made to Community Living Opportunities by visiting www.clokan.org.

Cheryl Lynn Blumenthal Olvera, 70, died peacefully in her sleep on June 14, 2020, at her home in Olathe, KS. Private family services will be held. She is survived by her husband, Henry Olvera; her sister, Marilyn (Peter Grisafi) Blumenthal;... View Obituary & Service Information

The family of Cheryl Lynn Blumenthal Olvera created this Life Tributes page to make it easy to share your memories.