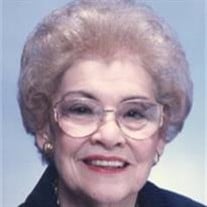 Claire Mirot Bell, of Prairie Village, KS, passed away on Friday, February 3, 2012. Graveside services will be at 1:30pm Sunday, February 5, at Mt. Carmel Cemetery. In lieu of flowers, the family suggests contributions to Beth Shalom Synagogue. Mrs. Bell came to the U.S. in October, 1938 from Marseille, France, with her beloved parents, Fannie Feingold Mirot and Isaac Mirot; and her dear sister, Eve. Her family left France for America one year before France was invaded, and was sponsored by the Kuluva and Feingold families. Claire helped her parents in their business, the Minnesota Furniture Company, in Kansas City, KS, and was able to, with assistance from the American Red Cross, salvage and rebuild the business after the flood of 1951. Mrs. Bell was a graduate of Central High School in Kansas City, MO and received her Associate Degree in Business Administration from Johnson County Community College. She retired from the United States Department of Agriculture after 21 years of service. She was an Accounting Technician and received an Outstanding Performance Award. Claire was a member of Beth Shalom Synagogue and was a Gold Star wife. Mrs. Bell enjoyed traveling in the United States and Canada, accompanied by family and friends. She was a caring and devoted mother to her three children, Joyce, Larry and Steven. She always promoted education as the way for her children to reach their goals and succeed in life. She was predeceased by her parents; her husband, Nathan Bell; sister and brother-in-law, Eve and Robert Fichman. Mrs. Bell is survived by her daughter and son-in-law: Joyce and Bill Shapiro, Overland Park, KS; son: Larry Bell, Overland Park, KS and son: Steven Bell, Prairie Village, KS; grandchildren: Evan and Lauren Bell and nephew: Fred Fichman, Maricopa, AZ.

The family of Claire Mirot Bell created this Life Tributes page to make it easy to share your memories.