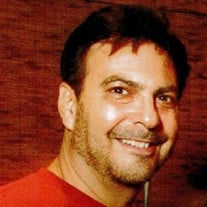 Craig Glazer passed away Wednesday, August 15, 2018 at Research Hospital. Craig died due to complications from leukemia. He is survived by his father, Stanford Glazer; and his nephews Jake and Alex Glazer, with whom he had a special relationship; cousins Steven and Karen Pack; Paulette Ram; Francis Emmer; Elizabeth Kaplan. In addition, his caring friend Shameirah King whom, along with Steven and Karen Pack, helped take care of him during his chemotherapy and after his admission to Research Hospital; and the many friends and former staffers at Stanford and Sons Comedy Club. Craig was a man of many passions and even more stories. He had a most checkered and colorful career. As co-owner and point man for one of the oldest family owned comedy clubs in the United States he was instrumental in helping launch the careers of Lewis Black, Sinbad, and Louie Anderson. Other comedians like Sam Kinison, Gabe Kaplan and the late Robin Williams were featured at Stanford and Sons Comedy Club, founded in 1975. In addition to running the comedy club, Craig’s other accomplishments included the production of two feature documentary films; the first of which, “Champions Forever,” premiered in 1990 and focused on the career of Muhammad Ali. In addition, he wrote a memoir, “The King of Sting,” reflecting on some of his extraordinary exploits during and after college. As a leader in the Westport Entertainment area he helped sponsor rallies for the Kansas City Chiefs which drew as many as 10,000 fans. After leaving Westport, Craig and his late brothers Jeff and Jack Glazer owned and operated comedy venues in the Legends, Overland Park and downtown Kansas City. Graveside services will be 10:30 a.m. Monday, August 20, at Mt. Carmel Cemetery, 5529 Ditzler, Raytown, MO. In lieu of flowers the family requests donations to be made to Jewish Family Services of Greater Kansas City, 5801 W. 115th St., Ste. 103, Overland Park, KS 66211.

Craig Glazer passed away Wednesday, August 15, 2018 at Research Hospital. Craig died due to complications from leukemia. He is survived by his father, Stanford Glazer; and his nephews Jake and Alex Glazer, with whom he had a special relationship;... View Obituary & Service Information

The family of CRAIG GLAZER created this Life Tributes page to make it easy to share your memories.