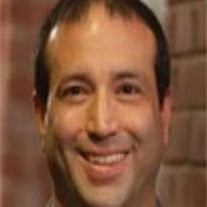 Craig Mitchell Citron, 46, of Overland Park passed away on April 22, 2013 after a year-long battle with melanoma. Funeral services will be at 9:30am Wednesday, April 24, at The Louis Memorial Chapel, 6830 Troost Avenue, Kansas City, MO with burial to follow at Rose Hill Cemetery. Contributions can be made to the Kansas City Hospice and Palliative Care, 9221 Ward Parkway, Kansas City, MO 64114; The Temple, Congregation B’nai Jehudah, 12320 Nall Avenue, Overland Park, KS 66209; Della Lamb Community Services, 500 Woodland Avenue, Kansas City, MO 64106 or the charity of your choice. Craig was born May 4, 1966, in Kansas City, MO, the son of Barry and Ellen Citron and was a lifelong area resident. He graduated from Shawnee Mission South High School in 1984 and went on to attend the University of Kansas where he graduated in 1989 with a business degree. Following University, he accepted an accounting position at BKD, LLP, a regional Midwest accounting firm, where he later became a partner of the firm specializing in primarily exempt organizations and not-for-profit clients. While at BKD, Craig was honored by Ingram’s Magazine’s as one of Kansas City’s 40 Under Forty, Class of 2005. After leaving BKD, he began working as the Director of Finance at Della Lamb Community Services, a local agency offering hope and assistance to low-income Kansas City people of all ages. Craig was a member of The Temple, Congregation B’nai Jehudah, serving on their endowment committee and was a member of the Greater Kansas City Jewish Community Center. He is preceded in death by his father, Barry Citron; grandparents, Sara and Harry Ginsberg and Millie and Maury Citron; and step-father Richard Kupper. Craig is survived by his children, Alex and Josh Citron; parents, Ellen and Edward Rose; sister and brother-in-law, Lori and Benjamin Blinn; the mother of his children, Eve Marsh; step-siblings, Stephen Rose and Robert Johnson, Beth and Steve Cole, Martin Kupper; Aunts, Linda Smuckler and Cheryl Citron; and lifelong friend, Gregg Herman and many cousins, nieces, nephews and friends. He was an avid sports fan and enjoyed attending and watching baseball, football and college basketball, especially the University of Kansas Jayhawks, with his two sons. He found the most joy in watching his children participate in sports and was extremely proud of what Alex and Josh have been able to accomplish athletically at such young ages. Alex and Josh truly were the center of his world and the loves of his life. He had a very kind heart and always had a smile on his face. He will be dearly missed by all who knew and loved him.

Craig Mitchell Citron, 46, of Overland Park passed away on April 22, 2013 after a year-long battle with melanoma. Funeral services will be at 9:30am Wednesday, April 24, at The Louis Memorial Chapel, 6830 Troost Avenue, Kansas City, MO with... View Obituary & Service Information

The family of Craig Mitchell Citron created this Life Tributes page to make it easy to share your memories.

Craig Mitchell Citron, 46, of Overland Park passed away on April...