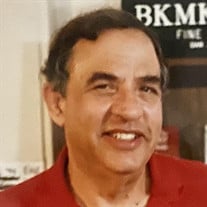 “All you can do Is what the Bird tried to: Blow it out your soul And hear it float back.” All Cats Turn Gray When the Sun Goes Down Dan Jaffe (January 24, 1933 - February 12, 2020) Few words better capture Dan Jaffe’s take on life. Jazz poet and proud father of six, Dan hailed from New Jersey where he studied with John Ciardi at Rutgers University. Ciardi not only mentored him but became a lifelong teacher and friend. From Rutgers, Dan went on to the University of Michigan where he won the prestigious Hopwood Award for poetry. He later became a Breadloaf Writers Conference fellow. His long literary career started with the publication of Dan Freeman, a book of poetry about Nebraska’s first homesteader. Dan eventually settled in Kansas City where he became a professor of English at the University of Missouri-Kansas City (UMKC). He taught there for 35 years and founded and directed BkMk Press, which is approaching its 50th anniversary. Dan’s reach was wide. He mentored students for decades and earned the love, respect, admiration and ire of more than a few. He had a reputation for relentlessly pushing them and took great pride in their successes. He worked with many writers - both early and late in their careers - editing their poems with ruthless affection. Dan published more than 12 books of poetry, about the American landscape, family, politics, Midwestern history and music. The books include Round for One Voice, Seasons of the River, Festival, On the Way to the Polls and Playing the Word. His poems appear in anthologies in the U.S., Canada, Australia and New Zealand. Dan’s body of work and his devotion to other writers earned him the first annual Writers Place award for his contributions to Kansas City’s literary community. In retirement, his passion for music and writing still drove him. He published and performed more than ever, which led UMKC’s Retirees Association to honor him with its first Recognition Award for his outstanding achievements locally and nationally as a jazz poet. Dan’s tremendous love for jazz is reflected in many of his books and creative projects. He relished collaborating across the board - with dancers, visual artists, musicians and other writers. He often performed with jazz musicians, and many of his poems have been set to music. His jazz opera All Cats Turn Gray When the Sun Goes Down was staged in Kansas City, St. Louis and New York City. He recorded his CD Playing the Word with Grammy nominated jazz pianist Mike Melvoin. Dan spoke and wrote with courage, rooted for the underdog and felt profound responsibility to champion justice. In many ways, he was ahead of his time. Dan was a feminist before the women’s rights movement and participated in sit-ins before the civil rights movement. A passion for justice and equality permeated his work. Dan had an incredible ability to inspire those he loved and mentored. He believed creative expression, in all its potential manifestations, mattered. He encouraged his children and others to follow their imaginations, consciences and talents. He was also known for being a bit irreverent, rebellious and argumentative. He could easily make unapologetic pronouncements - saying things without reserve because he thought they needed to be said - regardless of whether they offended whoever was listening. His kids often joked his two favorite sports were tennis and arguing. He could happily spend an afternoon debating the meaning of a word, discussing its etymology and connotations while consulting five dictionaries. Dan took great pleasure driving his kids to distraction with constant rhyming and punning. He once rhymed for hours on end while on vacation in Key West with his daughters. His daughters had to threaten shopping in kitschy gift shops in order to get him to stop. Nothing could delight him more than a well-crafted pun - his or someone else’s - except perhaps one of John Ciardi’s “dirty” limericks. The family would like to thank those who cared for Dan and tirelessly provided companionship, laughter and comfort at the end of his life. While so many people helped him in amazing ways, Takeel Jones, Char Roush, Fawn Lee, Ezekiel Boyce and the staff at Anthology of the Plaza deserve special recognition and love. Dan was preceded in death by his parents Samuel and Sadye “Sally” Jaffe, his sister Jacqueline, his brother Russell and his wife Jo Ann. He is survived by his children Michael Jaffe, Sara Juster (Matthew Sunkin), Anna Jaffe (Michael Horine), Tamar Jaffe Reyes (Michael Reyes), Marina Jaffe (Michel Valdez), Jonathan Jaffe (Bracha Chaya); grandchildren Caroline, Samantha and Ariel Juster and Sara Rivka Eidle, Devorah Leah, Chana, Chava Menucha, Menachem Mendel and Shula Shifra Jaffe. Donations in Dan’s memory may be made to BkMk Press at the University of Missouri-Kansas City.

The family of Daniel Jaffe created this Life Tributes page to make it easy to share your memories.

“All you can do
Is what the Bird tried to: