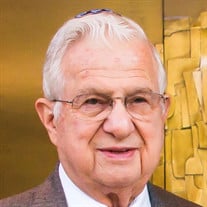 Daniel Toubes, M.D., of Leawood, KS, passed away at home on July 15, 2020. Born in 1937 to Abraham and Yetta Toubes of Des Moines, IA, he was a graduate of North High School where he was the school photographer. He earned his bachelor’s degree in general science and his medical degree at the University of Iowa. Dan and Natalie fell in love during Dan’s internship at Michael Reese Hospital in Chicago and were married just three months later. Dan enlisted as a medical officer in the Army at the rank of Captain, and the couple was stationed in Anchorage, AK for two years. They returned to the University of Iowa where Dan completed an Internal Medicine residency and both a fellowship and a masters degree in Clinical Pharmacology. Dan joined the The Medical Group of Kansas City in 1970 and served the Kansas City area as an internist for over 40 years. He attained Fellowship status in the American College of Physicians and earned recognition from the American Diabetes Association for quality of care. He was Chairman of the Department of Medicine at Baptist Memorial Hospital from 1978-1980 and President of Medical Staff from 1983-84. He served on multiple committees and boards at both Baptist and Menorah Medical Centers and was a lecturer and assistant professor at UMKC from 1971-1990. After retiring, he volunteered his medical services at the KC Care Clinic. Dan loved the art of medicine and took great joy in sharing his knowledge with patients, family, friends, and students. He loved all things related to the Iowa Hawkeyes and the University of Iowa. In his spare time, he enjoyed traveling the world with Natalie, boating at the Lake of the Ozarks, listening to classical music, and studying Jewish history. Dan is survived by his wife of 57 years, Natalie, his three children, Cantor Rosalie Toubes, Dr. Edie Toubes Klingler (Dr. Douglas Klingler), and David Toubes (Simone Toubes). He is survived by his brother Joseph Toubes and by his grandchildren - Sarah, Rachel, Ethan, Jake, Yael, Asher, and Sasha. In lieu of flowers, donations may be made in his honor to the Anti-Defamation League, the University of Iowa College of Medicine, or the charity of your choice. Private services and internment will be held at Mount Carmel Cemetery.

Daniel Toubes, M.D., of Leawood, KS, passed away at home on July 15, 2020. Born in 1937 to Abraham and Yetta Toubes of Des Moines, IA, he was a graduate of North High School where he was the school photographer. He earned his bachelor&#8217;s... View Obituary & Service Information

The family of Daniel B. Toubes M.D. created this Life Tributes page to make it easy to share your memories.

Daniel Toubes, M.D., of Leawood, KS, passed away at home on July...