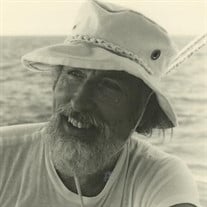 David Kingsley Dalke, 84, died surrounded by his family, on December 18, 2014. Born in Battle Creek, MI, to Paul and Sarah Dalke, David was an iconic individual. The single event that would define so much of his life was joining the United States Navy, at age 17. He served for 20 years on submarines, and was privileged to serve on the initial crew as a sonar man on the first U.S. ballistic missile submarine, the U.S.S. George Washington. He served as Chief of the Boat of the U.S.S Grenadier, and of the six boats on which he served, he earned the title of “Plank Owner” on two. His travels and adventures in the Navy and on water instilled a love of both in David. The sea remained a passion throughout his life. After retiring from the Navy, he earned a Bachelor of Arts degree in Industrial Arts from the University of Missouri, Columbia. After many years as a shop teacher, he began a third career teaching jr. high school, with specialties in math and remedial reading. While he was earning his Master’s degree in Education from the University of Missouri, he met his second wife, Henrietta Nemitoff, who was also earning a Master’s degree in Nursing Education. They married and moved to Miami, FL. After 17 years in the Miami-Dade school system, he retired and moved with Henrietta to Niceville, FL, and later they built their dream home in Viera, FL. In their retirement, they traveled extensively, including two around-the-world cruises, and visited more than three dozen countries. His hobbies including sailing (his boats included “The Suzy” and “The Shayne Lady”), kite-flying, shell collecting, and creating driftwood sculptures. In 1978, David and Henri discovered and bought a piece of Sanibel Island. They returned twice a year, each and every year for 36 years, sharing that slip of paradise with their children, grandchildren, and friends. He was involved in the U.S. Submarine Veterans (Snub Harbor Base), and a member of the Holland Club. He was a Past Master of Oleeta-West Dade Masonic Lodge, a 32nd Degree in Scottish Rite, and was a Shriner. David is survived by his wife, Henrietta Dalke; his daughter, Susan (and Paul) Stevens; his step-children, Tobi (and Ralph) Rettig, Rabbi Arthur (and Leslie) Nemitoff, Rita (and Ron Schonwetter), and Ethel (and George) Walsh.; his siblings, Arthur (and Sue) Dalke, Dorothy Myers, and Martha Lee Hindman. In addition, 11 grandchildren called him Zayde: Jacob Eichenbaum, Nathan Crews, Miriam (and Adam) Gold, Sara (and Oded) Shainin, Rachel Schonwetter, Elana Nemitoff, William Nemitoff, Jonathan Schonwetter, and Taylor Stevens. Funeral services will be 1:00pm Sunday, December 21, at The Louis Memorial Chapel with burial to follow in Rose Hill Cemetery. His family and friends will gather to say farewell to an unforgettable character. As he was remembered, an echo of David’s favorite saying was heard, “I am a curmudgeon, but my wife is nice.”

David Kingsley Dalke, 84, died surrounded by his family, on December 18, 2014. Born in Battle Creek, MI, to Paul and Sarah Dalke, David was an iconic individual. The single event that would define so much of his life was joining the United States... View Obituary & Service Information

The family of David K. Dalke created this Life Tributes page to make it easy to share your memories.

David Kingsley Dalke, 84, died surrounded by his family, on December...