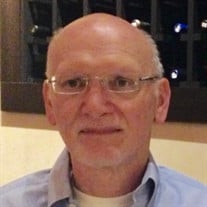 On Sunday, September 1, 2019, David M. Grunspan, loving husband, father of two children and grandfather passed away at the age of 72, while vacationing in Bucharest, Romania. David was born on March 21, 1947 in Ulm, Germany to Holocaust Survivors, Roman and Mira Grunspan. They immigrated to the U.S. in 1950 and established themselves in Kansas City, MO. David’s strong pursuit for education led him to receive a High School Diploma from Southwest High School, a B.S. with a Lifetime Teaching Degree from Central Missouri State College (now, University) in 1970, a Master’s Degree in Guidance and Counseling from University of Missouri Kansas City in 1974 as well as seeking further education with a certificate in Vocational Rehabilitation from Stout State University, Menomonie WI. In Dec. of 1968, David met his wife to be, Hedy Monica Spighelman, while vacationing in Israel. With an immediate spark of love, they were married 8 months later on July 28, 1969 in Nahariya, Israel. David’s love for Hedy continued for 50 years. David and Hedy raised two children, Alan S.H. Grunspan, M.D. and Rona Claire Grunspan, M.D. David’s life centered on his love of family and his strong work ethic. David enjoyed vacationing inside and outside of the U.S. as well as found joy in reading, watching movies and spending time with his grandson, Liam. David’s employment focused on helping others with positions in Jewish Vocational Services, as a Vocational Work Evaluator, the State of Missouri Disability Determination Unit as a Case Examiner and for the Social Security Administration of Federal Government as a Disability Examiner with the Disability Quality Branch, Office of Quality Review where he achieved the distinction of 40 years of Federal Government Service. David retired from this position on August 2, 2019. David is survived by his wife Hedy, his two children, Alan (wife Amara) and Rona Claire, his grandson Liam, brother Larry, and cousins, Maryla Lipovitz and Willy Greenspan. Funeral service will be held on Thursday, September 12th, at 2:30 pm at Louis Memorial Chapel 6830 Troost Ave. Kansas City, MO 64131, with burial to follow at Rose Hill Cemetery. In lieu of flowers, donations may be sent to Variety Children’s Charity of Greater Kansas City. https://varietykc.org.

On Sunday, September 1, 2019, David M. Grunspan, loving husband, father of two children and grandfather passed away at the age of 72, while vacationing in Bucharest, Romania. David was born on March 21, 1947 in Ulm, Germany to Holocaust Survivors,... View Obituary & Service Information

The family of David M. Grunspan created this Life Tributes page to make it easy to share your memories.