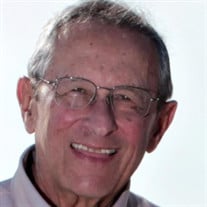 Dr. David Samuel Jacobs died Sunday at age 88, surrounded by family. David was an accomplished pathologist, devoted husband to his wife Judy Jacobs, devoted father of four, and grandfather to eight. David was born in Detroit, an only child to doting parents Harry and Rae Jacobs, and a bit of a rascal. A favorite family story has David running down the street, with the neighbors yelling, “Catch him, Mrs. Jacobs!” She never did catch him. He was a scout, a saxophonist and a professional photographer- and that was all before college. He studied undergrad (graduated cum laude) and medicine at the University of Michigan followed by a residency in pathology at the University of Michigan Medical Center and two years as Chief of Laboratory Services at U.S. Army hospitals in Fort Chaffee, Arkansas and Fort Riley, Kansas. He then pursued an additional year of study in clinical pathology and transfusion medicine at Mount Sinai Hospital in Chicago. He took a job in Kansas City and practiced here for 31 years, first at Menorah Medical Center for two years, then at Providence Hospital. He became Director of Laboratories at Providence-St. Margaret Medical Center, in Kansas City, Kansas. He was board certified in both anatomical and clinical pathology. Dr. Jacobs created a training program for laboratory technologists. He was a professor at both The University of Kansas Medical Center and the UMKC College of Medicine. He taught as an affiliate and/or adjunct professor at 17 additional institutions and served as a consultant at the Dwight D. Eisenhower Medical Center Department of Veteran’s Affairs in Leavenworth, Kansas. While a medical student David met Judy Gondos. They married less than two years later. They wed at the Michigan Union, and were married for 63 years. They had four children- Diane, Dan, Tom, and Jonathan. As the family grew, David returned to boating, teaching his children and eventually his grandchildren, to sail and ski. He was as at home on the water as he was on land. Dave and Judy hosted extended family and many friends at their beloved lake house in the Ozarks. Generations learned to waterski with David at the helm. Whether racing, or for pleasure, David was an accomplished and joyful sailor. On land he created beautiful landscapes, adorned with birdfeeders bringing among his favorites the industrious hummingbirds and brightly clad cardinals. David was a fellow of The American College of Physicians, the American Society of Clinical Pathologists and the College of American Pathologists. He was a founding signatory of the Heart of America Association of Blood Banks. He served as an inspector for the Commission on Laboratory Inspection and Accreditation, College of American Pathologists and American Association of Blood Banks. He served as one of the original pathologists at the Bloch Cancer Center. He wrote and edited five editions of the multi-author reference book on clinical laboratory medicine, The Laboratory Test Handbook, which became known as the Jacobs & DeMott Laboratory Test Handbook. David served as president of both the Kansas and Kansas City Societies of Pathologists, and was elected president of the Medical Staff at Providence Medical Center. He is also the author of over a dozen peer reviewed professional publications and contributed to, edited, authored, and reviewed 16 pathology texts and books. He modelled hard work, integrity and excellence. David valued education and sent three of his children to the Hyman Brand Hebrew Academy, which provided them with a deep knowledge and appreciation of Judaism and its values. He was pleased to provide exceptional educational opportunities for his family, valued their accomplishments and took pride in their many professional pursuits. David devoted much of his retirement to building one of the most elaborate model train sets in the midwest. It began on a standard room door and ended up filling up most of an eight hundred square foot room. He built mountains and lakes and a sawmill and a flower shop and outbuildings and funny little things hidden where most people never saw them, like a bear in a tree and a traveling man sitting on a toilet reading the paper. He called his train town Clemensville, based on the fictional world of Mark Twain. Train aficionados from all over came to see his trains, and he became a much photographed and published author of model railroading layouts and construction. Most of all, he enjoyed sharing the trains with his grandchildren. For his efforts he was awarded his Master Model Railroader designation on November 1, 2014, the 548th MMR granted by the National Model Railroad Association. He began taking photographs as a teenager, and it became a lifelong interest, as evidenced by the beautiful chronicle of family moments, small and large. It was his family that David loved most, and they undeniably adored him. He loved nothing more than to sneak the grandchildren ‘vegetables’ made of gumdrops, jellybeans and chocolate. Nothing brought a bigger smile than their visits, calls, and company. David died peacefully at home. He is survived by his wife, Judy, his four children Diane, Daniel (I. Cori Baill), Tom, and Jonathan (Sherri); and grandchildren Max, Annie, Ariel, Avi, Eli, Forrest, Ezra, and Rachel. Graveside services will be held on Wednesday, Sept. 16. In lieu of flowers the family would appreciate consideration of a donation. We respectfully suggest the Hyman Brand Hebrew Academy 5801 W.115th St., Overland Park, KS 66201; Congregation Beth Shalom, 14200 Lamar Ave. Overland Park, KS 66203; the University of Michigan Pathology Fellowship Fund, https://leadersandbest.umich.edu/find/#!/mimed/mimed/path, or the charity of your choice.

Dr. David Samuel Jacobs died Sunday at age 88, surrounded by family. David was an accomplished pathologist, devoted husband to his wife Judy Jacobs, devoted father of four, and grandfather to eight. David was born in Detroit, an only child... View Obituary & Service Information

The family of David S. Jacobs, MD created this Life Tributes page to make it easy to share your memories.