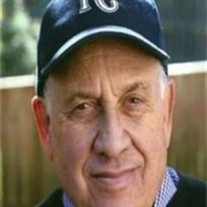 David Edward Wolff, 65, of Prairie Village, died Sunday December 5, 2010 of complications from esophageal cancer. Services will be at Noon on Wednesday, December 8th, at Congregation Beth Torah, 6100 West 127th st, Overland Park, Kansas 66209. Burial at Mt. Carmel. David was a lifelong area resident. He was born in Kansas City, son of Joseph and Eleanor Wolff, and graduated from Southwest High School in l963. He was a teacher of American History, American Government and Anthropology at Shawnee Mission East High School from 1969-1976 and a guidance counselor there from 1976-2000. He was a Pep Club sponsor. He co-wrote a nationally syndicated newspaper column called “Talk to Us” - a teen age advice column distributed by Universal Press Syndicate from 1989-1995. In the 1970’s he taught religious school at The Temple, Congregation B’nai Jehudah and was Principal of the Sunday School at New Reform Temple. After retiring as a counselor, David went back to his original love of teaching. He went to the Hyman Brand Hebrew Academy where his beloved daughter went to school, where he could be close to her, and again taught American History and American Government. He then took a break and following his love of feeding people, became a cook at Irv’s, a deli. Next, David worked for several years for his dear cousin and closest friends Rich and Lynn Klein. In October of 2004 David once again returned to teaching - this time at The University Academy at 68th & Holmes in Kansas City, Missouri. He taught 8th grade American History. After finally retiring from teaching, he went to work at Jay Wolfe Honda. He drove people to work or home after they had dropped their car off to be repaired. He loved driving from one end of the city to the other - listening and talking to people. David’s hobbies were reading about history, riding his bike and going to baseball games. David was a true baseball fan his whole life, rarely seen without his baseball cap and happy to sit in his season seats, rain or shine, usually with his daughter Jessica or one or more of his nieces and nephews. David could not go anywhere in the city without meeting people he knew - either parents of former students or the students themselves. People always said that he was their favorite teacher or best counselor. He truly loved children and was always on the side that was best for them. David was preceded in death by his father and mother. He was a devoted son. He was a beloved uncle of Charly, Sam, Asa, Isaac, WuQing and Sarah. He has had a profound effect on their lives. David was truly a brother to his sisters-in-law Miriam Hipsh (whom he was close friends with since he was 16), Harlene Hipsh Minkoff, Diane Wolff and Rhea Schwartz. David talked on the phone every week to his brothers Larry, Portland, Oregon and Paul, Washington D.C. Each call had a large portion devoted to discussing sports and trivia. He cherished his relationship with both of his brothers and always knew he and his family could count on them for their love, support and wisdom no matter what the situation was. David leaves his wife of 23 years, Nancy and his daughter Jessica who were the most precious people to him in the whole world and the joy of his entire life, as he was and always will be to them, and they will miss him every day of their lives. May his memory be a blessing. The family requests no flowers and suggests contributions to the David Wolff Fund of RBI (Return Baseball to the Inner City) c/o Boys and Girls Clubs of Greater Kansas City, 6301 Rockhill Road, #303, Kansas City, Missouri 64131.

The family of David E. Wolff created this Life Tributes page to make it easy to share your memories.