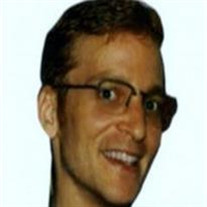 David H. Berger of Kansas City, MO, passed away unexpectedly on July 19, 2011 in his home, after a long, hard battle with Crohn’s Disease. The funeral service will be at 10:00am Sunday, July 24, at The Louis Memorial Chapel, 6830 Troost Avenue, Kansas City, MO with burial to follow in Rose Hill Cemetery. The family requests contributions to Crohn’s & Colitis Foundation of America, 386 Park Avenue South, 17th Floor, New York, NY 10016. David was born August 20, 1964, to Jerome D. and Heather S. Berger and was preceded in death by his father Jerry Berger. He leaves his mother, Heather Berger of Overland Park, KS; sister, Laurie Berger-Milne and her husband, Ross Milne, of Bend, OR; daughter, Bay Berger and former wife, Christi Berger, both of Beaumont, TX. David played racquetball all over the country as a teen, winning many tournaments and graduated from Pem Day High School before discovering his passion for music, fashion, art and photography. He spoke French and enjoyed traveling all over the world where he met and remained friends with an array of culturally diverse people. David was quick with a joke and quicker to offer a hand to anyone in need. He was giving, caring and loyal. His thirst for knowledge was never quenched and he was relentless in his pursuit of new information, a trait he acquired from his parents and passed on to his daughter. Handsome and tall, David cast an attractive figure but was modest and quiet in his ways. He call his daughter Bay his “Star of David” and it only took watching his eyes light up when he spoke of her to realize how much in love with her he was. David loved animals and the wonders of nature and rarely took the beauty found there for granted. The photographs he captured show not only his deep passion, but his eye for beauty…, a beauty he found in everything. His disease took so much from him but he continued to plan for the future and was always ready to offer a smile to anyone who needed one. David was a beautiful spirit and the world will miss his shining crown of red hair, his ever present Converse/Armani combo and his bad jokes.

David H. Berger of Kansas City, MO, passed away unexpectedly on July 19, 2011 in his home, after a long, hard battle with Crohn’s Disease. The funeral service will be at 10:00am Sunday, July 24, at The Louis Memorial Chapel, 6830 Troost Avenue,... View Obituary & Service Information

The family of David Herschel Berger created this Life Tributes page to make it easy to share your memories.