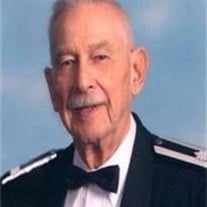 David (Dave) S. Rubin, Lt. Col. (Ret.) USAF, passed away on Thursday, July 28, at his home in Lenexa at the age of 93. Services will be held at 10:00 a.m. on Monday, August 1 at the Louis Memorial Chapel, 6830 Troost Ave, KCMO. Burial will follow at 12:30 p.m. at the Leavenworth National Cemetery, 150 Muncie Rd., Leavenworth, KS. Attendees are asked to gather at the cemetery office at 12:15. In lieu of flowers, memorial gifts may be made to the Heart Failure Fund in care of Saint Luke’s Foundation, 4225 Baltimore, KCMO 64111 or the Kehilath Israel Synagogue, 10501 Conser, Overland Park, KS 66212 Dave was born on February 9, 1918 in New Haven, CT to Abraham and Esther Rubin. He graduated from Yale University in 1939 and received a Master of Science degree from Columbia School of Business in 1941. He married Doris Kessler of Richmond, VA in 1945. His distinguished and decorated military career in the Air Force took him and his family all over the world. Along with his many duties over his 29 years of service, he played a vital role in the Ballistic Missile Program. After his retirement in 1970, he and Doris continued to enjoy traveling extensively. Dave had a lifelong love of music and the performing arts – particularly jazz, classical music and opera. He was a talented violinist, performing with the New Haven Symphony during his college years, and also a member of the Yale Glee Club. His other passions included golf, stamp collecting and reading. He was a member of the Military Officers Association of America, Air Force Association, Military Order of World Wars, Jewish War Veterans Post #605, board of the Jewish War Veteran’s Museum, National Rifle Association, Friends of the Johnson County and Kansas City Libraries, Yale University Alumni Association, Yale Club of Kansas City, Hillel Society, International Association of Jazz Record Collectors, Kansas City Jazz Ambassadors, and the Lyric Opera Guild. He was also a committed supporter of the Republican National Committee, the Jewish Federation of Greater Kansas City and the United Way of Kansas City. He was a member of the Kehilath Israel Synagogue and a former member of The Temple, Congregation B’nai Jehudah. He will be remembered by family and friends as a man of strong principles and convictions with a quick wit and great sense of humor. He was one “jazzy” guy! He is survived by his devoted wife of 66 years, Doris; his children and their spouses, Martin and Penney Rubin, Peggy and Michael Borkon; his grandsons, Andrew and Matthew Borkon; his sister, Libbe Murez; and many nieces, nephews and cousins.

The family of David S. Rubin created this Life Tributes page to make it easy to share your memories.