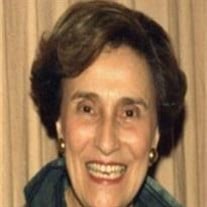 Beloved wife, mother, grandmother and great-grandmother, Doreen Berenbom, 86, passed away in Kansas City, Missouri on October, 28, 2011. Funeral services will be held 2:00pm Sunday, October 30, at The Louis Memorial Chapel, 6830 Troost Avenue, Kansas City, MO. Burial to follow at Mt. Carmel Cemetery. Doreen was born on January 4, 1925 in Winnipeg, Manitoba (Canada) to Fanny and Harry Katz. She had an idyllic childhood in Prince Albert, Saskatchewan. Doreen graduated from the University of Saskatchewan in 1945 with a degree in chemistry and biology. On June 1, 1947, Doreen married Dr. Max Berenbom. They spent the first four years of marriage in Bethesda, Maryland. While Max completed his fellowship at the National Institute of Health, Doreen worked as a medical technologist. In 1951, Doreen moved to Kansas City where she and Max raised their family. Wonderful summers were spent in Saskatchewan so that the children would be close to their Canadian family. Doreen was known for her ever-present enthusiasm and smile. For 32 years, she taught at Beth Shalom Nursery School. Her creative lesson plans, including art appreciation, are taught to this day. Miss Doreen enriched the lives of countless children. Doreen was a member of Beth Shalom Synagogue and was active in the Sisterhood. She was a longtime volunteer for the Jewish Federation. Along with Max, Doreen helped to resettle Russian refugees. With great care and energy, they made apartments into warm and welcoming homes. Because she was fluent in Yiddish, she was often a translator for the elder newcomers. Doreen cherished family and friends. She is survived and will be greatly missed by her husband of 64 years, Max; a daughter, Paula Cohen (Cliff); a son Dr. Loren Berenbom (Merilyn); grandchildren, Hilary Singer (Jeremy), Alison Czarski (Brian), Dr. Anne Wishna (Victor), Michael Berenbom (Mollie), Katherine Berenbom; three great-granddaughters, Lila Singer, Vivien Wishna, Eliana Berenbom; and brother, Barry Katz (Ida). In lieu of flowers, memorial contributions can be made to the Jewish Community Foundation (5801 W. 115th St., Overland Park, KS 66211) or Children’s Mercy Hospital (2401 Gillham Rd., Kansas City, MO 64108).

The family of Doreen Katz Berenbom created this Life Tributes page to make it easy to share your memories.