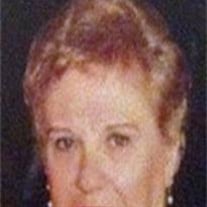 Doris Almaleh, 81, of Overland Park, KS, passed away Sunday, June 30, 2013 at Village Shalom. Funeral services will be at 2:00pm Tuesday, July 2, at The Louis Memorial Chapel, 6830 Troost Avenue, Kansas City, MO, with burial to follow at Mt. Moriah Cemetery. In lieu of flowers, the family suggests contributions to Hyman Brand Hebrew Academy or Village Shalom. Doris was born September 17, 1931, in New York, NY, the daughter of Kasel and Yetta (Herman) Lipow. She had lived most of her life in NY prior to moving to the Kansas City area in November, 2010 to be with family. She worked for Style-Rite Optical her whole career starting in 1961 and retired in 1993. Doris was a member of ORT, Hadassah and the Clearview Jewish Center, Clearview Gardens, NY. She enjoyed Mahjong, theater and traveled the world with her husband, Isaac, whom she married in 1951. Doris was preceded in death by her parents, and is survived by her husband of 62+ years, Isaac Almaleh; son and daughter-in-law: Larry and Harriet Almaleh, Overland Park, KS; daughter: Robin Almaleh, India; grandchildren: Ryan Almaleh and Kathleen Almaleh.

The family of Doris Almaleh created this Life Tributes page to make it easy to share your memories.