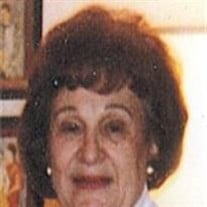 Doris Edelman, 84, of Overland Park, KS passed away on Monday, December 21, 2009. Funeral services will be held at 11:00am Thursday, December 24 at The Louis Memorial Chapel, 6830 Troost Avenue, Kansas City. Burial will follow at Mt. Moriah Cemetery. Doris was born in Hildesheim, Germany, the daughter of Jacob and Fanny Tager. After Kristallnacht, the family left Germany through the assistance of her uncle Zvi Brender, traveling to the Netherlands, where they boarded the Rotterdam for passage across the Atlantic to Cuba. The family lived in Havana for a year and a half, after which she and her family emigrated to the United States and Kansas City, where they were sponsored by members of the local Jewish community, including Rabbi Mayerberg of Temple B’nai Jehudah and Doris’s cousins, Jay and Henry Duni. She attended Central High School and Kansas City University, where she earned a Bachelor’s degree in Spanish and Economics. After graduation, Doris worked at Butler Manufacturing, translating Spanish, German and French correspondence. She met Dr. William Edelman of Cleveland, OH, with whom she shared a happy marriage of sixty-two years. Doris was a life member of Hadassah and was active in Youth Aliyah, the National Council of Jewish Women, Congregation Beth Shalom and its Sisterhood and Temple B’nai Jehudah. She was an avid bridge player and enjoyed travel to Vail, Colorado, where she summered with Bill for thirty-two years. After raising three boys, she began a successful career as a stockbroker, becoming head of the syndicate department and the first female vice-president and partner of B.C. Christopher and Company, where she worked for more than twenty years. Doris is survived by her husband Bill, of the home; sons and daughters-in-law Mark Edelman and Karin Lichterman of Leawood and their son CJ Edelman and daughter Risa Edelman of Washington, DC; Alan Edelman and Debbie Sosland-Edelman of Leawood and their son Alex Edelman of Leawood, daughter Katja Edelman of Israel and son Jonathan Edelman of the home; and Ron Edelman and Joan Nunnink of Leawood and their sons Thomas Nunnink of Kansas City and Tim Nunnink and Joe Nunnink of the home. In lieu of flowers, please consider a donation to the Hyman Brand Hebrew Academy.

The family of Doris Edelman created this Life Tributes page to make it easy to share your memories.

Doris Edelman, 84, of Overland Park, KS passed away on Monday,...