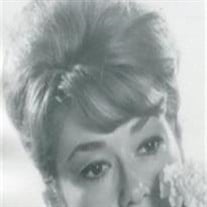 Doris Taube (Goldin), 86, of Mission Hills, KS, passed away Wednesday, June 6, 2012 at the Kansas City Hospice House. Graveside services will be at 3:30pm Friday, June 8, at Mt. Carmel Cemetery. In lieu of flowers, the family suggests contributions to the Jerry Taube Scholarship Fund at The Temple, Congregation B’nai Jehudah or a charity of one’s choice. Doris was born in Kansas City, MO, the daughter of Nathan and Esther (Schneider) Levine and was a lifelong area resident. She attended Kansas City schools, graduating from Paseo High School in 1943 and was a member of MENSA. Doris had many talents including the gift of writing. She loved to volunteer by serving at Menorah Medical Center on the Auxiliary Board for 20 years. She was a member of The Temple, Congregation B’nai Jehudah and its Sisterhood, Brandeis University Women’s Committee, Sierra Club, Friends of Art and the Audubon Society. Doris was a former member of Beth Shalom Synagogue and the Oakwood Country Club. She met and married Jerry Taube in 1947. They shared a love of dancing, traveling and entertaining during their 42 years of marriage. Jerry passed away in 1989. Doris married Harold Goldin, her second husband, in 1990. They enjoyed sharing their twenty two years together in the beautiful home that Doris created. She was preceded in death by her parents; her husband Jerry and by her sister and brother-in-law, Ruthye and William Nowick. Doris is survived by her husband, Harold Goldin; her other family members: James and Marla Goldin, Gayle Goldin, Charles Goldin, Jackie and Larry Kamin, Stevie and Shelly Pessin, Neily Schoegler, Gregory and Jaime Pessin. Also surviving are great nieces and nephews and dear friends, Richard Schoegler and Margaret Brownlee.

The family of Doris Bernice Taube (Goldin) created this Life Tributes page to make it easy to share your memories.