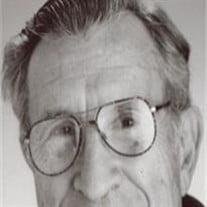 Dr. Dewey K. Ziegler, 92, of Prairie Village, KS, passed away Thursday, September 13, 2012 at his home. Memorial services will be at 9:30am Sunday, September 16, at New Reform Temple, 7100 Main, Kansas City, MO. In lieu of flowers, the family suggests contributions to The Nature Conservancy, 700 SW Jackson, Suite #804, Topeka, KS 66603 or Doctors without Borders. Dr. Ziegler was born in Omaha, NE and was educated at Harvard University and Harvard Medical School. He was an area resident for 41 years, serving as Professor and Chairman of the University of Kansas Department of Neurology. He was also a past President of the American Academy of Neurology. Dr. Ziegler was a lifelong member of the New Reform Temple and was a former board member of The Nature Conservancy. He was happily married for 41 years to Gertrude Benjamin Ziegler, who shared his love of nature, music and family. Dr. Ziegler was a devoted husband, father and grandfather. He also was a passionate bird watcher, gardener and conservationist. His colleagues, friends and family will remember him as a lifelong learner and extraordinary teacher. He was preceded in death by his parents, Isidor and Pearl (Kiper) Ziegler, and his wife, Gertrude B. Ziegler, who died in 1995. Dr. Ziegler is survived by his daughters and sons-in-laws: Amy L. Ziegler, St. Louis, MO; Laura Ziegler Davis and her husband Gardiner, Prairie Village, KS; Sara Ziegler Prince and her husband Theodore, Leawood, KS; sister: Louise Kramer, Sarasota, FL; grandchildren: Joseph Ferber, Rebecca Ferber, both of St. Louis, MO; Julia Davis, Eleanor Davis, Benjamin Davis, all of Prairie Village, KS; Carol Prince and Kiper Prince, both of Leawood, KS; The family will always be grateful for the care he received from his several loving and attentive caregivers.

The family of Dr. Dewey K. Ziegler created this Life Tributes page to make it easy to share your memories.