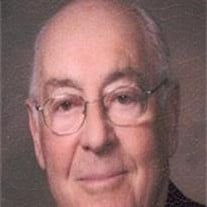 Dr. Oscar Pinsker, 84, of Leawood, Kansas, passed away on April 17, 2010, after suffering a stroke. A burial service will be held on Sunday, April 18, 2010 in Chicago, IL and a memorial service will be held in Kansas City on Tuesday, April 20, 2010 at 4:30pm at Oakwood Country Club, 9800 Grandview Road, Kansas City, MO 64137. Oscar was born in New York City August 12, 1925, but lived his entire life in Kansas City. A graduate of Central High School, he served in the United States Navy during World War II and was awarded a fleet appointment to the U.S. Naval Academy at Annapolis. After the war, he earned both is undergraduate and medical degrees from Washington University in St. Louis. He completed an internship and residency in general surgery at the University of Utah followed by a residency in otolaryngology at the University of Kansas. He later served as a medical officer during the Korean War. A specialist in otolaryngology, Oscar was a fellow of the American Academy of Otolaryngology, the American College of Surgeons, a member and past president of the KC Society of Ophthalmology and Otolaryngology. A past president of the medical staff at Menorah Hospital, he was the first physician appointed to Menorah’s Board of Directors. Oscar was also on the hospital staff at Research Hospital and Baptist Medical Center. He contributed significant time as a clinical assistant professor of otolaryngology at the University of Kansas School of Medicine, supervising resident training. Oscar was chairman of the health committee and a member of the governing board of “LINC”, Kansas City’s Local Investment Commission which enables state and local institutions to offer services to the underprivileged. In private practice for 54 years, Oscar and partners founded Head and Neck Surgical Associates, P.A., formerly Otolaryngology Medical Group. Among Oscar’s many personal interests were spending time with his grandchildren, fine wine, performing arts, music, fly-fishing, golf and poker. He enjoyed life to the fullest. He had that unique quality of brightening any room he entered with a wonderful smile and a twinkle in his eyes. He is survived by his wife Barbara Pinsker, son Mark (Jit) Pinsker of Thailand, daughter Lisa Pinsker of Fairway, stepchildren Margaret Ann (Frank) Drinkwine of Prairie Village and Rick (Becky) Estrin of Stilwell, Wendy Bandklayder of Miami, FL and Judy (Jerry) Shapiro of Northbrook, IL. Oscar was preceded in death by his parents, Anna and Abraham Pinsker; his brothers Bill, Otto and Jacob Pinsker, and his sister, Belle Joseph. He was also preceded in death by his first wife Bonnie Pinsker and his second wife Bonnie McAfee. Special thanks to his devoted caregiver, Aneta Whitfield as well as to Dorothy King and Ermia Grandberry. Oscar’s dedication to his family, friends and patients will be a cherished and lasting gift to all who knew him. In lieu of flowers, the family suggests contributions in Oscar’s memory be made to the Otolaryngology Department at KU Medical Center, Mail Stop 3010, 3901 Rainbow, Kansas City, KS; The Jewish Federation of Greater Kansas City at 5801 W. 115th St. Overland Park, KS 66211 or a charity of one’s choice.

The family of Dr. Oscar T. Pinsker created this Life Tributes page to make it easy to share your memories.