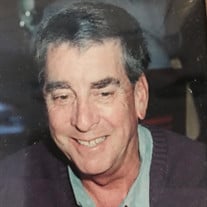 Earl S. “Buzz” Katz, Jr., Kansas City, Missouri, passed away on November 9, 2019. A memorial service will be held at 1:00 pm on Friday, December 6, 2019 at The Louis Memorial Chapel, 6830 Troost Ave, Kansas City, MO 64131. A private family inurnment will follow in Rose Hill Cemetery. A celebration of Buzz’s life will be from 6-9 pm, December 7, 2019 at Princess Gardens, 8906 Wornall Rd, Kansas City, MO 64114. In lieu of flowers, the family suggests contributions to Wayside Waifs or Unleashed Pet Rescue. Buzz was born in Kansas City, Missouri on December 7, 1937, the second child of Earl S. Katz and Dorothy “Sis” Katz. He attended Prairie School and graduated from Pembroke Country Day School in 1955. He graduated from Menlo College, Menlo Park, California. After college, Buzz worked in management for the Katz Drug Company. Following the sale of the company, Buzz began a career in the wholesale gift business having founded Heatherwood, Ltd. Following the sale of that company, Buzz commenced a successful career buying, renovating and managing rental homes throughout the Brookside and Waldo neighborhoods. Buzz was a perfectionist. He always recognized the value of good customers. He was meticulous in the renovation and maintenance of his homes and understood that it was more important to keep a home occupied with a satisfied resident than to raise rents. He took pride in the long tenure of his residents and the help he was able to give many young families starting out. Buzz was a good athlete. He played varsity baseball and basketball in high school having played on some of the great Pem Day basketball teams of the mid-fifties under coach Eddie Ryan. He played 3 and 2 baseball and American Legion baseball culminating in playing at the state championship game at Busch Stadium in St. Louis. He loved golf and played most of his life. He preferred to play a round of golf, walking, and enjoyed camaraderie of friends than keeping score though he was very proud when he played well. Buzz married Diane Shoemaker Katz in 2002. Diane and Buzz enjoyed good food, reading and each other’s company and especially their dogs and cats. He was proud of what he called their “petting zoo.” They traveled widely for several years, especially enjoying cruising. One of his great enjoyments was filling his yard with bigger than life inflatable figures during the weeks leading up to Halloween. He loved to see the joy it brought to the hundreds of kids from all over the city that came to his house each Halloween, including this year, to see the display. Buzz leaves his wife, Diane, of the home, children Gregg Katz, Olathe, Ks, daughter, Lisa Grossman (Bob), Menlo Park, CA, grandchildren, Meagan Katz and Ryan Katz, Vancouver, WA, Hannah Grossman and Abigail Grossman, Menlo Park, CA. He also leaves brothers Steve Katz (Sharon Fallek), Overland Park, and Ward Katz, Prairie Village, and sister, Leslie Cohen, San Miquel de Allende, MX., sisters in law Donna Katz and Barbara Katz and many nieces and nephews, three dogs (Tandy, Winston and Dakota) and two cats (Simba and Freedom). The family wants to thank the wonderful caregivers from Thoughtful Care and Kansas City Hospice and Palliative Care.

The family of Earl S. "Buzz" Katz, Jr. created this Life Tributes page to make it easy to share your memories.