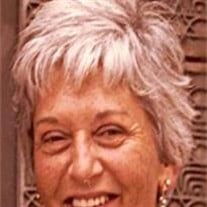 Edith Levy Hellerstein, age 86, died October 11, 2010, at her home in Kansas City. She had Chronic Obstructive Pulmonary Disease. The funeral service was held Friday, October 15, at the New Reform Temple. The family will receive visitors at home on Saturday, October 16, from 6 until 9 p.m. Contributions may be sent to the Jewish Family Services of Kansas City or Heifer, International. Edith Levy was born October 1, 1924, in Secaucus, New Jersey. She worked her way through college, beginning with night school classes at Rutgers University. (While working at a cottage cheese factory, she once lost an heirloom diamond ring in a vat of cottage cheese.) At age 18, she joined the WAVES, and served as an aerographer's mate at the Anacostia Naval Air Station, in Washington, DC during World War II, where she met her future husband, Stanley Hellerstein. After the war, Edith used her GI benefits to attend the University of Colorado at Boulder. She earned a BA in philosophy and became re-acquainted with Stan. Edith and Stan were married on August 28, 1949. They first lived in Denver where Edith earned a masters degree in social work from the University of Denver. They then spent a few years in Indianapolis before settling in Kansas City in the mid-1950s. Edith's passions included art, philosophy, education, politics, and debating any issue, as well as a desire to improve services for people in need. She worked both as a volunteer and a professional in the areas of social work, community development planning, and mental health services. She enjoyed literature and was a longtime member of a National Council of Jewish Women study group. Edith is survived by Stan Hellerstein, her husband of 61 years; her children Joseph Hellerstein (married to Suzanne Hellerstein) of Seattle WA; Alice Ra'anan (married to Michael Ra'anan) of Potomac, MD; and Ann Hellerstein (married to Samuel Belkin) of Rockville, MD; and 7 grandchildren: Myra Hellerstein and Toba Hellerstein; Gabriella and Joshua Ra'anan; and Daniel, Mitchell, and Melanie Belkin. She was preceded in death by her sister Ruth Pearlman.

Edith Levy Hellerstein, age 86, died October 11, 2010, at her home in Kansas City. She had Chronic Obstructive Pulmonary Disease. The funeral service was held Friday, October 15, at the New Reform Temple. The family will receive visitors at... View Obituary & Service Information

The family of Edith Hellerstein created this Life Tributes page to make it easy to share your memories.