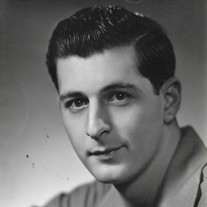 Though it is with great sadness we note Edward’s passing, due to natural causes, on November 16th, five days past his 95th birthday, we embrace the opportunity to honor the kindness, wisdom and gentle dignity he shared with family, friends and his community every day of his life. Born in 1923 to Harold and Bernice (Aaron) Kander, he attended E.C. White School and Westport High where he was a top student and athlete. Despite a natural love for musical theater, he eagerly agreed with his younger brother, John, that if one of them was destined for show business, it probably wasn’t him. Ed would graduate from Antioch College, but not before flying 1,500 hours as a radioman for the Army Air Force over the “Hump” from Casablanca to Cairo to Baghdad to Karachi and back more times than he cared to remember. Upon his return to Kansas City, his first order of business was to marry Ann Benjamin, with whom he would soon have John (Marcia), Steven (Janet) and Susan (Warren). Ann predeceased him in January 2016, just shy of 70 years together filled with lifelong friends, travel and the support and advocacy of many musical, educational and civic enterprises that continue to enrich the city. In 1948, Edward was at Harvard Business School when his father passed away, and the newlyweds had to return home for Ed to go to work for the Edward Aaron Corporation, the poultry business founded by his maternal grandfather. Not surprisingly, the joy of “chicken plucking” was lost on him and, after managing the company’s sale, he joined a lifelong friend to rebuild Meinrath Brokerage Company. He also continued to dedicate himself to his community, as a board member and president of Jewish Family Service and, subsequently, the local chapter of The United Way. At an age when most men of his generation choose to retire, he finally made his professional entry into “the arts” by virtually inventing the position of Director of Development for The Kansas City Lyric Opera where he pioneered new paradigms of arts fundraising and management that helped The Lyric grow to become one of the premiere opera companies in America. Even more than the challenge of operationally fixing organizations, he loved hanging with the people in the theater—singers, musicians and stage crew— finding profound inspiration in standing on an empty stage that would, by curtain time, be transformed into a magical set for creative expression, passionate performance and audience enjoyment and enlightenment. So it was that with his quiet, joyful talent for encouraging others to fulfill and share their creative gifts, he found his own true art, which in fact, he had been practicing his whole life. Along with his children, Edward is survived by his brother, John (Albert), six grandsons—Jason Kander (Diana), James Kander (Sharen), Samuel Ashworth (Shannon), Jeff Kander (Sasha), Jacob Ashworth, and William Kander—and, so far, four great-grandsons and (at last!) a granddaughter, all of whom are blessed with the sense-memory of his gracious, knowing heart. Contributions in his name can be made to ALS Association (alsa.org) and Let America Vote (letamericavote.org).

Though it is with great sadness we note Edward&#8217;s passing, due to natural causes, on November 16th, five days past his 95th birthday, we embrace the opportunity to honor the kindness, wisdom and gentle dignity he shared with family, friends... View Obituary & Service Information

The family of Edward Felix Kander created this Life Tributes page to make it easy to share your memories.

Though it is with great sadness we note Edward’s passing, due...