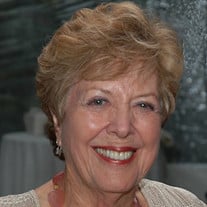 ELAINE BROUDY POLSKY September 9, 1925 - February 14, 2016 Elaine Broudy Polsky, 90, passed away on February 14, 2016 at Village Shalom in Overland Park, KS. Funeral services will be at 10:3am Wednesday, February 17, at The Louis Memorial Chapel, 6830 Troost Avenue, Kansas City, MO with burial to follow at Mt. Carmel Cemetery. In lieu of flowers, the family suggests contributions to the Joel Polsky USY Fund at Beth Shalom Synagogue, 14200 Lamar Ave., Overland Park, KS 66223, or a charity of your choice. Irene “Elaine” Broudy was born September 9, 1925 in Los Angeles, CA to Rose & Abe Broudy. While attending UCLA, she met United States Marine Corps Infantry Officer, Norman Polsky, of Kansas City. He proposed after only two dates, and they were married on July 4, 1946. They celebrated 64 years of marriage until his passing in 2010. After their first year of marriage, they moved to Kansas City. Elaine missed her family and friends in L.A., but soon made lifelong friends and forged a life of community service with leadership roles in her adopted city. She served as President of the Women’s Division of the Kansas City Council of Jewish Federation, and was the first woman President of Congregation Beth Shalom. A leader to the finish, she even served multiple terms as President of the Residents Council at Village Shalom as she neared the end of her life. Elaine was a docent at the Nelson-Atkins Museum of Art, co-chair of the National Conference of Christians and Jews, a co-founder of the Westport Free Health Clinic, and graduated with a B.A. in Sociology, with distinction, at age 48 from University of Missouri – Kansas City. Many honors were bestowed upon Elaine, including The Kipnis Wilson/Friedland Award at the International Lion of Judah Conference, and The Kansas City Israel Bond Award. Together, she and Norman were honored as Philanthropist of the Year, and were recognized by National Conference of Christians and Jews. After the death of their son, Joel, in 1982, she and Norman established substantial endowments in his name, benefitting many Jewish and secular organizations. Elaine was a devoted wife, a wonderful mother and grandmother, delectable cook and hostess. She lived her life helping others through good deeds. She celebrated her 90th birthday in September with family and friends and was blessed with three great-grandsons in the last 1 1/2 years of her life. Elaine was preceded in death by her parents, Rose & Abe Broudy, husband Norman, son Joel, in-laws, Rachel & Isadore Polsky and brother-in-law, Morris Horowitz. She leaves a daughter, Karen Kent, sons Larry Polsky ("daughter-in-love", Ellen) and Steve Polsky (Mark Oliver), grandchildren Autumn Kent Grimmitt (Magnus), Renee Silver (Larry), Jennifer Salazar (Adrian), Joseph Polsky and Gabriel Oliver-Polsky. She also leaves her three great-grandsons, Balthazar Grimmitt, Nathan Silver and Noah Salazar, as well as brother & sister-in-law, Irv & Bonnie Broudy, sister-in-law, Esther Horowitz, nephews Robert Broudy (Tammy), Mark Horowitz (Abby) and Dennis Horowitz (Sue), and many cousins and lifelong friends. The family would like to thank the staff at Village Shalom, where Elaine lived for the last six years, her physician Dr. Alexander Davis, Kansas City Hospice, and especially her devoted caregiver and companion of many years, Creola Battle.

The family of ELAINE BROUDY POLSKY created this Life Tributes page to make it easy to share your memories.