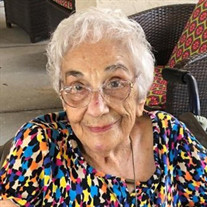 We are saddened to announce the death of Elinore Kutler(Ester Bat Berish) beloved mother to Stephen Kutler and Elaine Klugman. Elinore passed away on January 28, 2022, at age of 99. In addition to Stephen (Phyllis Needelman), a devoted daughter Elaine Klugman (Steve Klugman predeceased)of Lenexa Kansas. Her grandchildren, Seth Kutler(Andrea),Josh Kutler(Hannah) Michelle Kamalich(Richard), Kory Klugman(Joanna) Kasey Klugman and Kenny Klugman(predeceased), numerous great grandchildren, Breckon, Dagon, Aliya, Canton, Wesley, Katie, Kourtney Klugman and Lila and Ezra Kutler Elinore is predeceased by her husband of 70 years, Ben(Dov Ber Shlomo Zev). Her parents Ben and Etta Robinson, a brother Marvin Robinson and sister Louise Goodman Funeral Service: A grave side funeral service will take place on Monday, January 31, 2022 at Kehilath Israel Synagogue Blue Ridge Cemetery,Independence, MO. Shiva Minyan: A shiva Minyan will be announce later. Elinore Kutler was born in Lincoln, Nebraska in 1923. Her parents along with some of her cousins owned a department store. When the depression came they lost everything. Her mother passed away when she was eleven, so she helped raise her brother and sister. After graduating from high school and being an excellent typist she began her career . Since there wasn’t a young Jewish male population in Lincoln she would often travel by bus to Omaha. During one of those trips she met my dad at a get together at Mrs B., who was know as Rose Blumkin of Nebraska Furniture Mart fame, who often would have get togethers for young women and men in Omaha. They married in 1942 settled in Omaha until 1958, when they relocated to Kansas City, MO. In Kansas City she worked for the Department of Agriculture and raised her family. They were members of B’nai Israel Synagogue in Omaha for 15 years and 64 years at Kehilath Israel Synagogue in Kansas City. In addition, she had numerous friends and her regular mahjong group. She enjoyed doing her cross word puzzles and a ardent Kansas City Chiefs fan. My mother never said a bad word about anyone, including relatives and friends. The only time when she would say something when someone was making a turn and not using their turn singal, including me. She was a kind and loving person.

We are saddened to announce the death of Elinore Kutler(Ester Bat Berish) beloved mother to Stephen Kutler and Elaine Klugman. Elinore passed away on January 28, 2022, at age of 99. In addition to Stephen (Phyllis Needelman), a devoted daughter... View Obituary & Service Information

The family of Elinore R. Kutler created this Life Tributes page to make it easy to share your memories.

We are saddened to announce the death of Elinore Kutler(Ester...