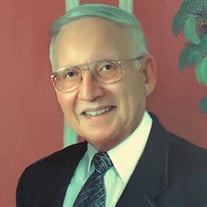 Ernest M. Fleischer died on January 18, 2022 in Prairie Village, Kansas following a years-long struggle with a degenerative neurological condition. He was 89. He was deeply devoted to his family. The fields of finance and tax law were his passion. Dogs, wood-burning fireplaces and baseball brought him joy. Ernie was born January, 4, 1933 in St. Louis, Missouri to Sam and Judith Fleischer. An only child, he grew up in the suburb of University City. Color blind, he was unable to join his father in the family textile business. In high school, he earned his Eagle Scout, played saxophone in the band and was a member of the Junior Reserve Officers' Training Corps. He attended college locally at Washington University, where he served in the ROTC and earned three degrees — BA, BSBA and MBA —in four years, along with his CPA. He was drafted by the US Army to serve in the Korean War and trained as an anti-aircraft artillery gunner, but the war ended before he could be deployed. Later, he was assigned to the Finance Corp where he served two years helping to overhaul the army’s cost accounting system. He attended Harvard Law School, and following his second year, while serving as a summer associate at Kansas City’s Stinson, Mag and Fizzell law firm, he met the love of his life, Barbara Fredkin. The two met on a blind date in June 1958 and were married two months later. At summer’s end, they drove back to Cambridge as husband and wife. After graduation from law school in the spring of 1959, the couple returned to Kansas City and Ernie joined Stinson, Mag full-time. Their daughter Pam was born that fall and their son Ernest W., “Chip,” was born in 1964. Ernie was a tax law partner at Stinson Mag for nearly three decades before leaving the firm to serve as chairman of Franklin Savings Association. He spent the final years of his working life of counsel to the Husch Blackwell law firm. Surviving Ernie are Barbara, his wife of more than 63 years, his daughter Pam and her husband Ken Weiner, his son Chip and his wife Amy Josephthal Fleischer, his granddaughter Emily Rosenbaum and her husband Neil Rosenbaum, grandsons Ernest Daniel and Hayden William Fleischer, and great-grandchildren June Hartstone, Mick Ernest, and Sonny Jean Rosenbaum. Ernie chose to donate his body to the University of Kansas School of Medicine and Medical Center for education and research, so rites of burial will not be performed until a later date. In lieu of flowers, the family requests that donations be made in Ernie’s honor to The Midwest Innocence Project, themip.org, or the nonprofit organization of one’s choosing.

Ernest M. Fleischer died on January 18, 2022 in Prairie Village, Kansas following a years-long struggle with a degenerative neurological condition. He was 89. He was deeply devoted to his family. The fields of finance and tax law were his passion.... View Obituary & Service Information

The family of Ernest M. Fleischer created this Life Tributes page to make it easy to share your memories.