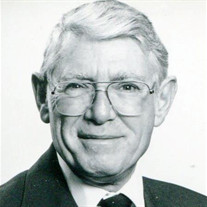 Erwin LaPine passed away peacefully at his home with family members at his bedside on the second night of Chanukah, Dec. 25, 2016. His Hebrew name was Yisroel ben Shmuel Ha’Cohen. Erwin was born March 22, 1926 to Eugene and Fannie LaPine in Wilmington, N.C. He spent his childhood years growing up in Brooklyn, N.Y., Chicago, Il, Charlotte, S.C., and Orange, TX. He was a proud veteran. He served in the Army Air Corps from Jan. 1944 to Apr. 1946 as a Corporal in the Caribean Islands. He was also Second Lieutenant Quartermaster in the US Army Reserves. He received his BBA from the University of Houston in June 1951. He met the love of his life, Janice Roslyn Simon at Hillel at the University of Houston, and they were married Apr. 30, 1950, Lag B’Omer. He worked for Ford Motor Co. 37 years as an accounting supervisor. Many of his fondest memories were his years in Houston after his marriage to Janice. During the early 60’s he was an active member of the Democratic Party in Houston, TX; he was a precinct representative receiving invitations to Presidential & Gubernatorial inauguration ceremonies. He received the Community Service Award by the Houston Community Relations Bureau in 1961. In 1965 he left the “Southern hospitality” for the “Heart of America” after Ford Motor Company transferred Erwin to Kansas City. Thus began the LaPine Family Kansas Legacy. Erwin was past president of Heart of America B’Nai Brith Men, and a B’Nai Brith bowler. He was affiliated with the Chabad Community and a former member of Kehilath Israel Synagogue; he served as a Board member at KI and was a volunteer on their Sunshine Committee. He was also KI Minyanaire of the Year 1993. Family, honesty, and kindness were his trademark. All his grandchildren have fond memories of “Camp LaPine”, spending summers with Bubbie and Grandpa, enjoying special trips to Washington, D.C. and the Ozarks (Grandpa drove a 15 seater van). After retirement he used his computer savvy to tap into his spiritual side. He also enjoyed fishing and bicycling. Most of all, he cared for his wife Janice for 66 years doing what was best for Mom, Bubbie. He always did acts of kindness in a quiet and unassuming way. He is survived by his wife Janice, son Chaim Dovid LaPine (AKA Dennis), daughter and son-in-law Pam and David Reiz, son and daughter-in-law Leland and Judy LaPine, 10 grandchildren, and 13 great grandchildren. He was predeceased by a sister, Lorraine Moore, and brother, Stanley LaPine. The Reiz/LaPine Families appreciate the visits of friends and special thanks to Rabbi Sholom Wineberg, Rabbi Mendy Wineberg, Rabbi Zev Wineberg, Rabbi Avromi LaPine, Rabbi Yudell Reiz, Shmuel Reiz, Shmuel Siegel, and Dr. Donald Cohen. Donations may be sent to Chabad of Overland Park, KS, Chabad of Leawood, KS, Chabad of Mizzou, 313 E. Brandon Rd., Columbia, Mo. 65203, Chabad of University City, CA, 3813 Governor Dr., San Diego, CA 92122.

Erwin LaPine passed away peacefully at his home with family members at his bedside on the second night of Chanukah, Dec. 25, 2016. His Hebrew name was Yisroel ben Shmuel Ha&#8217;Cohen. Erwin was born March 22, 1926 to Eugene and Fannie LaPine... View Obituary & Service Information

The family of ERWIN LAPINE created this Life Tributes page to make it easy to share your memories.

Erwin LaPine passed away peacefully at his home with family members...