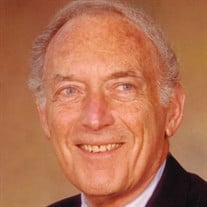 Erwin R. Sackin passed away on September 4, 2017 at the age of 102 after a brief illness. Born in Kansas City, he attended Bryant Elementary School and was a member of the second graduating class of Southwest High School in 1932. Erwin attended Kansas City University (UMKC) and was graduated from Kansas City School of Law (UMKC School of Law) in 1936. He was very proud of being an attorney, and was the oldest member of The Kansas City Bar Association and Missouri Bar. Erwin was in private practice prior to World War II when he enlisted in the United States Navy in 1942. After officer’s training, he was deployed to Guam where he served for three years, achieving the rank of First Lieutenant. Erwin was awarded the Distinguished Service Medal from The Veterans of Foreign Wars. He was the recipient of the Award for Distinguished Service from the Kansas City, Missouri Auxiliary Police for his service before and after World War II. Upon returning from service, Erwin served as CFO, In-House Counsel and Director of S-G Metals Industries, Inc. (formerly known as Sonken-Galamba Corporation, a family concern founded at the beginning of the 20th Century). He was also an Officer and Director of National Compressed Steel Corp. Both companies were sold in 1995. Erwin believed one should serve their community, firstly with the gift of their time, and then quietly by donating what one could afford to give financially. He was on the board of directors of many organizations, including the National Conference of Christians and Jews (now The National Conference for Community and Justice); The YMCA; Menorah Medical Center (Vice President and Director); Research Hospital (Director); Kansas City Senior Golf Association (Officer and Director); Kansas City, Kansas Chamber of Commerce; Oakwood Country Club (President and Director); UMKC Alumni Association and its School of Law; Missouri Bar Association, and The Kansas City Metropolitan Bar Association. Above all else Erwin loved his family. He married his best friend, Elaine Ruth Galamba, in 1939 and in the ensuing decades they could always be seen walking hand-in-hand. They played tennis together, later switching to golf, which they played until the age of 94. Erwin and Elaine celebrated their 75th wedding anniversary in 2014. They had three children, Judy, Patty and Andrew. Erwin greatly enjoyed traveling with Elaine and vacationing with the entire family. Traditions were important to him, especially placing the topper on the Christmas Tree, celebrating family birthdays and co-hosting their Annual New Year’s Day Party with Elaine, which they did for many years. Erwin took great pride in the paintings and sculptures Elaine created and in the accomplishments of each of his children, their spouses and their friends. He enjoyed helping others be the best they could be and reveled in their happiness. He was preceded in death by his wife Elaine; daughter Judy Kravat; brother Gene Sackin; brother-in-law L.G. Galamba Jr. and sister-in-law Lou Galamba; and Margaret Sauer, whom he considered his third daughter. Erwin leaves behind his daughter, Patty Nelson and son-in-law Steve Nelson; son Andrew R. Sackin; grandsons Tim Schultz (Michelle) and David Schultz (Jenny); granddaughters Stephanie Connery and Jennifer Kravat; Sally Hodgkinson (Charles); sister-in-law Marjorie Sackin; nieces Cindy Galamba and Nancy Oiler (Kent); nephews Steve Sackin (Linda), Ken Sackin (Teri); Rocky Galamba and 7 great grandchildren: Samantha Schultz, Eric Schultz, Tyler Schultz, Zack Schultz; Matthew Connery; Isis Hodgkinson and Rex Hodgkinson. The family wishes to thank La’Tyce Taylor, Aubree Logan and Kathy Pemberton for their unselfish and loving care. The family also thanks Crossroads Hospice. In lieu of flowers, donations may be made in Erwin’s memory to: The Cancer Society, Arthritis Foundation, Parkinson’s Disease Foundation or the charity of one’s choice. A private service was held.

Erwin R. Sackin passed away on September 4, 2017 at the age of 102 after a brief illness. Born in Kansas City, he attended Bryant Elementary School and was a member of the second graduating class of Southwest High School in 1932. Erwin attended... View Obituary & Service Information

The family of ERWIN RAY SACKIN created this Life Tributes page to make it easy to share your memories.