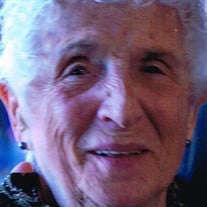 Mother, grandmother, great grandmother and devoted friend, Esther (Roth) Claster of Kansas City, Missouri, passed away Sunday, August 7, 2016. Services will be held on Wednesday, August 10, at 10:00am at The Louis Memorial Chapel, 6830 Troost, Kansas City, MO. Burial will follow service at Rose Hill Cemetery, 6900 Troost, Kansas City, Missouri. In lieu of flowers, the families suggest contributions to Hyman Brand Hebrew Academy. Esther was the daughter of Adolf and Rose Roth of Phillipsburg Pa. She lived most of her adult life in Williamsport Pa, where she raised her family, until moving to Kansas City in 1963 with her ten year old son and $700.00 to start a new life. One week after arriving in Kansas City, she got a job at Robinson’s Shoe Company and worked for them for 30 years as a women’s shoe salesman, winning the top salesperson award for her whole career; later in her career at Robinson’s she became Handbag Buyer. After Robinson’s closing she worked 20 years for Dillard’s Department store in women’s shoes at Ward Parkway Shopping Center where she was a Pace Setter until their closing. After retiring at 90 years old, she worked three days a week part time at a thrift store. She loved working with the public and prided herself in having personal customers, their children, and their children’s children as customers. It would be a normal occurrence that you would be at a restaurant having dinner with her and someone would recognize her, and come to the table to talk. She didn’t always remember their name, but could tell you there shoe size. Her unique ability to connect with people brightened the lives of everyone she met. She made a lasting impression with all who knew her. She will be remembered fondly. Esther loved Mahjong and played for over 70 years. She also knitted throughout her life; she learned at the Red Cross as a teenager knitting sweaters for military men overseas who were fighting in World War II. Friends and family, at one time or another, had a sweater, gloves, mittens, scarf or afghan made by Esther. Esther thought of many of her friends and their families as her family and would introduce them as family. Although Esther’s biological family was small, her adopted family was huge. In addition to her parents, she was preceded in death by her sister and brother-in-law, Ruth and Will Mandelbaum; nephew, Arthur Mandelbaum; brother and sister-in-law, Frank and Lois Roth; sister, Rita Poisner; son-in-law, Nathan Kofman and grandson, Brian Kofman. Esther is survived by son, Robert Claster, Overland Park; daughter, Linda Kofman, Jerusalem Israel; brother-in-law, Larry Poisner, Leawood, KS; grandchildren: Hillary (Yossi) Shoshan, Jerusalem Israel; Erik (Keren) Claster, Jerusalem Israel; Zachary Claster (Heather Zordel) , Lenexa Kansas; Scott Claster Los Angeles, California; Alex Claster Venice Beach, California; Ortal, Rachel, Baruch, and Bini Shoshan, Jerusalem, Israel; Paulina Siegel, Denver, Colorado; Benjamin Siegel, Detroit, Michigan; her great grandchildren: Noah, Adam, Levi Claster, Lenexa, Kansas; Amiad, Eldar, Shiloh, Kedem, Re’em Claster, Jerusalem Israel. She had a passion for her family and relationships with her nieces and nephews: Beth Levant, Greg Williams, Karen Hogan, Craig Roth, Natalie Roth and Amy Abrams, Bonnie and Matt Siegel and Judy and Denny Marengetti and their family. The family would like to thank her caregivers at Timberlake Care Center. We are deeply grateful for our wonderful Hospice nurses, Gayle and Diane, from Gentiva Hospice.

The family of ESTHER (ROTH) CLASTER created this Life Tributes page to make it easy to share your memories.