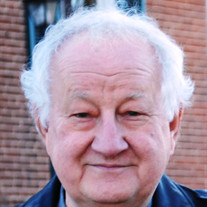 Taras Eugene Bileski was born on January 29, 1939 passed away peacefully on April 8, 2014 after a long bout with pancreatic cancer. He grew up in Winnipeg, Manitoba as one of three children of Kasimir and Eugenie Bileski. Funeral service will take place on Friday, April 11, at 2:00 p.m. at Louis Memorial Chapel, 6830 Troost, Kansas City, and the burial service immediately follows at Mount Carmel Cemetery, 5529 Ditzler Road, Raytown. He worked briefly for his philatelist father and spent one year of college towards an engineering degree. Gene learned to ride motorcycles on a 1949 HD FL Hydroglide at age 16. It was his first bike and he never lost his love of cycling and bikes. He acquired later models of HDs and although inherently unstable they satisfied his lust for adventure. He rode thousands of miles across Canada and the United States always armed with a pack of replacement parts and tools. Many times his ride did not get him home so he looked forward to a day of better touring bikes. In 1964 he went into the motorcycle trade to follow his passion and never retired. He became an importing dealer of Norton and Ducati by 1965 when he established his dealership Chariot Cycle in Winnipeg. Much of Gene’s business relied on mail order and due to numerous postal strikes he moved to the United States in 1985. He made his home in Minneapolis for 16 years. By this time, the Honda Gold Wing motorcycle, introduced in 1975, opened up uncharted territory in touring. He devoted the rest of his career to procurement of parts and accessories for the Gold Wing under the name Saber Cycle and spent the last years of his life developing the reproduction of obsolete OEM parts. After discovering his wife, Diane, and lower real estate values in the KC area, he decided to move south to Raytown, MO in 2000 where he resided ever since. No matter the disappointments and hardships in his life, he always maintained a philosophy of moving forward, surrounding himself with beauty and embracing his passions. He cultivated a love of music early in life listening to great voices such as Italian tenor Enrico Caruso, on his 45s. He developed a broad spectrum appreciation of classical and operatic music. He also loved jazz and became enchanted with the Blues after picking up a Winnipeg radio station playing Delta blues in Biloxi and began collecting music by Benny Moten, Fats Waller and more. Gene was a great supporter of the KC Symphony, Lyric Opera of KC and the Friends of Chamber music. He was highly self-educated, could talk on any subject and his friends and acquaintances were amazed at his ability to recall volumes of facts and historical detail. His love of food transcended from the Ukrainian culture he grew up in where he relished his mother’s pyrohy and cabbage rolls. He is survived by his wife of 13 years, Diane Krizek, sister Jeanette (Alex) Warga and brother Felix; children Randy Bileski, Billy Adelman, Elin, Kasimir and Gil Bileski, Brian Lee and Rochelle Owings; grandchildren Matthew and Jennifer Bileski, Audrey Pendergraft and Liam Owings. He was predeceased by his parents, Kasimir and Eugenie (Negrych) Bileski and son, Yaron Bileski. The family wishes to extend its deep appreciation and affection for the staff at St. Luke’s East who cared for his many medical needs, providing him comfort in a warm, loving atmosphere.

Taras Eugene Bileski was born on January 29, 1939 passed away peacefully on April 8, 2014 after a long bout with pancreatic cancer. He grew up in Winnipeg, Manitoba as one of three children of Kasimir and Eugenie Bileski. Funeral service will... View Obituary & Service Information

The family of Eugene Bileski created this Life Tributes page to make it easy to share your memories.