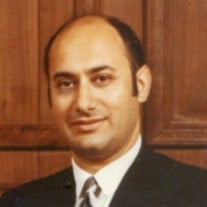 Eugene Goldstein, 84, of Leawood, KS passed away on Friday, September 4th, 2015 at his home in Town Village Leawood, now Brookdale Leawood, a community he had truly come to love. Graveside services at Rosehill Cemetery, 12:30, Sunday, September 6, 2015. Donations may be made to the Heritage Center at he Jewish Community Center of Greater Kansas City in honor of his spirit, determination, and sense of humor. Eugene was born May 18th, 1931 in Kansas City, MO to Glenn Goldstein and Betty Berman. Younger brother Robert Goldstein, with whom he remained close, was born nine years later. It was at Paseo High School that he met Elaine Nelkin, who was to eventually become his partner in life for 64 years. Together they raised three kids who have expanded the Goldstein-Nelkin family tree with seven grandchildren and four great-grandchildren. A dedicated, hard-working man, who alongside his father-in-law, Henry Nelkin, had a long successful career with Piper Brace International. He was very proud of his patented innovations and creations in the medical supply and equipment business. During “retirement” he cultivated a successful career in commercial real estate. A man of many qualities, humor, chivalrous, and family being the most apparent, he also thoroughly enjoyed sharing his many stories with a smile on his face and that twinkle in this eye, and leading the holiday meals that made for good stories in and of themselves. For many years he was a regular at workout and pool fitness classes making good use of his membership at “The J”. He enjoyed the performances put on at many of the local theaters including The White Theater, watching classic films and television stars like Johnny Carson. Gene was proud to say he was one of the founding members of The R.O.M.E.O.S brotherhood, always looking forward to their Friday lunches. He spent enjoyable times playing bridge and poker with some of his longtime friends and fellow card game enthusiasts, and having an active role in community involvement at Town Village, including being on the menu committee (not a surprise knowing the tasty meals prepared by his mother while growing up), and last but not least making it his responsibility to not only play Thursday night BINGO but also inspire others to join as well. His wonderful sense of humor, excitement for newness, laughter, kindness, love, devotion, and friendship will be missed tremendously. We can only hope to have a life similar to his - one surrounded by friends and family, seeking positivity in even the worst of times, standing strong and deeply stubborn for that which he found most important, and seeking adventure. Time for the memories to flow and the spirit of his nature to continue to impact through his life-long friendships and family including wife Elaine Goldstein, brother Robert Goldstein and daughters, Leslie (Don) Nottberg, Cynthia (Charlie) Dyck, son Eric (Michelle) Goldstein, grandchildren Adam Collier, Baree (Scott) Buchbinder, Becky Collier, Gaelyn Nottberg, Abby Nottberg, Lauren Goldstein, and great grandchildren Eliza and Noah Collier, Mira and Theo Buchbinder. The family expresses their appreciation to Abbie Grooms, Dr. Don Cohen and Dr. Lloyd Stahl.

The family of EUGENE GOLDSTEIN created this Life Tributes page to make it easy to share your memories.

Eugene Goldstein, 84, of Leawood, KS passed away on Friday, September...