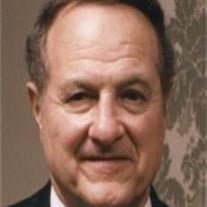 Eugene L. Novorr of Leawood, KS, passed away on April 1, 2011. Funeral services will be 11:00am Sunday, April 3, at The Louis Memorial Chapel, 6830 Troost Avenue, Kansas City, MO. Burial Mt. Carmel Cemetery. In lieu of flowers, the family would like contributions to Village Shalom, 5500 W. 123rd St., Overland Park, KS 66209 or a charity of one’s choice. Gene was born on November 5, 1924 in Kansas City, MO. He proudly served his country in the U.S. Army during WWII. Upon returning home, he joined his father and brother Howard in the family business, “Michael’s Fine Clothing” and remained there until 2007. Gene and Shirley were married December 25, 1950. They were members of Beth Shalom Synagogue where Gene was a life member of the board. He was active in B’nai B’rith #184, Meadowbrook Country Club, Scottish Rite and Ararat Shrine. He was the former president of Crossroads Business District. He was involved throughout the community. Gene was the son of the late Michael and Dorothy Novorr. He is survived by his loving wife of 60 years, Shirley, and children, Sherri (Steve) Newstead, St. Louis, MO, Robin (Eddie) Stone, Dallas, TX, Keith (Vicki) Novorr, and Poppa to grandchildren, Andrea and Todd Newstead, Michael and Josh Novorr, and Jamie (Adam) Lipp. He leaves behind his brother Howard (Marge) Novorr, sister Helen Margolis Cohen, late brother Gerald Novorr’s wife Pearl, sister-in-law and brother-in-law Grace and David Ernstein. He will be missed by many nieces and nephews, and an abundance of longtime friends. Special thanks to the many devoted caregivers at Village Shalom. To Gene, family was most important and he cherished the many wonderful times spent together. Gene, Daddy, Poppa will be greatly missed by all.

The family of Eugene L. Novorr created this Life Tributes page to make it easy to share your memories.