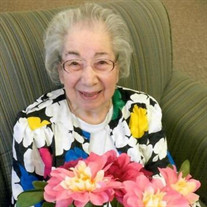 Evelyn Levin Gibian, 92, died peacefully at Village Shalom, where she has lived for six years. Evelyn was born in Kansas City, MO to Annie and Harry Levin and was a lifelong area resident. Evelyn married the man of her dreams, Marvin, on a snowy day in 1949. They enjoyed 66 wonderful years together. She could never teach him to dance and he could never teach her to swim or jog but they made a great team raising a family with the values that were important to them. She met each day and each challenge with a smile on her face. Evelyn is survived by her daughter Linda Gibian and son in law Mark Fishman of Leawood, KS. She is also survived by her brother and sister-in-law, Stan and Isabel Levin of Owings Mills, MD and her son-in-law, Rabbi Jeremy Fenster of Jerusalem. Evelyn was preceded in death by her husband Marvin; her daughter, Ellen Fenster of Jerusalem; her sister Rosalie Siegel of Kansas City, MO; her brother Les Levin of Scarsdale, NY and a great grandson in Israel. Evelyn had 12 beloved grandchildren, Jacob Fishman, Levi Fishman (Angela Jeffers), Esther Fishman (Steven Drake), Bracha Krohn (Moshe), Binyamin Fenster (Rochel), Sarah Kornfeld (Hudi), Kyla Norman (Jakov), Malka Avraham (Meir), Chana Shapiro (Duvie), Uri Fenster (Goldie), Akiva Fenster (Tehila) and Rachel Reiss (David). Evelyn was also blessed with 47 great grandchildren, living in New York, California, Florida and Israel. Evelyn leaves many loving nieces, nephews, cousins and friends. Evelyn’s life revolved around her family and service. She enjoyed cooking family dinners nightly, celebrating birthdays, and hosting holidays. Handmade decorations adorned her tables at each event. Outside of her home, she was an active volunteer. She was part of a mother-mentoring project that became Headstart. At JC Nichols elementary school she helped develop an in-school library. She was a Brownie and Girl Scout leader for many years. Her earliest memories were volunteering with her mother at Appleman House, the Village Shalom of that time, a tradition she continued for many years as a volunteer in the gift shop, culminating in receiving the first Age of Excellence award. With Marvin, she became an active member of Beth Shalom. She served as president of the Sisterhood and chaired many events and committees for the congregation. She was president of the Women’s Division of the Jewish Federation and Shalom Geriatric Center Auxiliary. Other organizations she dedicated time to were National Council of Jewish Women, Menorah Medical Center Auxiliary, HBHA, Hadassah, Bnai Brith Women, Brandeis and the JCC. Graduating from the first Melton class and having a group adult Bat Mitzvah were highlights of her ongoing Jewish education. Thanks to the staff at Village Shalom and Ascend Hospice. In lieu of flowers, the family requests donations to Beth Shalom Sisterhood or Village Shalom.

Evelyn Levin Gibian, 92, died peacefully at Village Shalom, where she has lived for six years. Evelyn was born in Kansas City, MO to Annie and Harry Levin and was a lifelong area resident. Evelyn married the man of her dreams, Marvin, on a... View Obituary & Service Information

The family of Evelyn Gibian created this Life Tributes page to make it easy to share your memories.