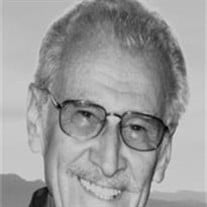 Dr. Federico Adler passed away unexpectedly on February 28, 2011. He was born in Neunkirchen, Austria on February 10, 1929. In his 82 years, Dr. Adler lived a remarkable life. He and his family left Austria in 1938 just after the Nazi invasion and Kristallnacht. They arrived in Guayaquil, Ecuador and subsequently settled in Quito, Ecuador in 1939. He survived numerous tragedies in his young life, beginning with the Nazi destruction of his extended family as well as the death of his younger brother due to illness. He studied at the Colegio Mejia in Quito and graduated from the medical school at the Universidad Central del Ecuador. By age 23, Dr. Adler was a medical director of a small rural public health clinic performing surgeries, delivering babies and practicing general medicine. By then, he had met the love of his life, Betty Burbano, and began a 55-year love affair. They had two daughters; Betty and Margarita. The University of Kansas Medical Center welcomed Dr. Adler to their school of Orthopedic Surgery in 1955. This marked the beginning of a 50+ year professional relationship with KU Med Center; including positions as Instructor of Surgery, Assistant Professor of Surgery and Clinical Associate Professor, training many young residents who adored him. He also served as a staff member and Chief of Staff at Menorah Medical Center. Dr. Adler was in private practice from 1963 to 1993 caring for thousands of grateful patients. He then began a second career at the Veterans Administration Hospital working at the Orthopedic Clinic for thirteen years. When Dr. Adler retired from the VA, he went back to his “home” at KU Med Center and began to mentor residents, run research programs and develop research projects. Dr. Adler enjoyed the professional camaraderie and friendship of his medical colleagues. He strongly believed that education was the most important role he would ever play professionally. Dr. Adler was also a world traveler. His travels took him to every continent, including the Arctic Circle and Antarctica. He recently returned from Australia and New Zealand. He was an avid mountaineer, climbing six major peaks: Kilimanjaro, Everest, Fuji, Elbrus, Cotopaxi and Chimborazo. His family was his greatest joy and priority. His children Betty and Margarita were his closest friends. He kept strong bonds with his extensive worldwide family. Dr. Adler enjoyed his six grandchildren from birth to adulthood. He attentively developed very close, unique relationships with each grandchild. Most recently, he had the great joy of developing close relationships with his great-grandchildren, Coco and Charlie. He leaves behind his loving daughters Betty Adler (Mark Rosenberg) Chevy Chase MD, and Margarita Adler; his adored grandchildren, Aaron Claxton (Erin Claxton) Silver Spring MD, Sarah Claxton, Eli Rosenberg, Danny Rosenberg, Chicago Ill.; Rebecca Rotenberg, Los Angeles, CA and Anna Leah La Voie (Michael La Voie) San Jose, CA. He also leaves behind his cherished great-grandchildren, Colette Bayla Claxton and Charles Louis Claxton, Silver Spring MD. Dr. Adler was a renaissance man in the truest sense of the word…a gentleman, scholar and loyal friend. His legacy lives on. Funeral services will be at 11:30am Thursday, March 3, 2011 at The Louis Memorial Chapel, 6830 Troost Avenue. Burial at Kehilath Israel Blue Ridge Cemetery. Kindly omit flowers; The family suggests contributions to Hebrew Immigrant Aid Society, KU Endowment or a charity of your choice.

Dr. Federico Adler passed away unexpectedly on February 28, 2011. He was born in Neunkirchen, Austria on February 10, 1929. In his 82 years, Dr. Adler lived a remarkable life. He and his family left Austria in 1938 just after the Nazi invasion... View Obituary & Service Information

The family of Federico Adler, MD created this Life Tributes page to make it easy to share your memories.