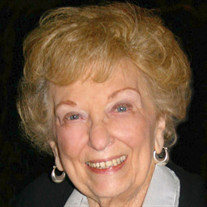 Frances Jean Lerner died on Monday, December 8, 2014 at her home in Village Shalom, Overland Park, KS. She was 91. The funeral will be at Louis Memorial Chapel at 11:00am on Thursday, December 11, 2014 with burial in Mount Carmel Cemetery. The family suggests contributions to Kansas City Hospice and Palliative Care or Congregation Ohev Sholom. Family was central to her life. Frances is remembered by family and friends for her grace, sense of humor, and endless supply of Jelly Bellies. Her courage in the face of family losses and hardships was an inspiration to all who knew her. Her many anonymous acts of kindness were often known only to those for whom they were done. She touched the hearts of many people throughout her lifetime. Frances was a long time member of Congregation Ohev Sholom, Prairie Village, where she was very active with many fundraising activities over the years. Born in Lincoln, Nebraska to the late David and Sarah Wishnow; beloved wife of the late Meyer Lerner, mother of Paula Robinson of Leawood, Rabbi Devon Lerner of Boston, the late Dr. Scott Lerner, and mother-in-law of Leslie Lerner of Mission Hills; sister of Harold (Bonnie) Wishnow and the late Eleanor Klein; grandmother of Adam, Alex, and the late Brian Robinson; Jonathan, Jessica, Abby, and Aaron (Jo Marie Scaglia) Lerner, Elizabeth (John) Newkirk; great grandmother of Frances Starr Lerner and Wyatt Scott Newkirk. Beloved aunt of Roni, and Mark (Marci) Klein and Rich Klein, who cared for her for many years; David Wishnow, Yvonne (Randy) Holland; Bruce (Devra) Lerner, Michael (Audrey Asher) Lerner, Barbara (Bob) Palan, Sharon (Mike) Milens, Ralph (Ruth) Klopper; Marsha (Bob) Horowitz, Gary Lerner; sister-in-law of Helen Levitch and Rosie Lerner; many extended family and friends.

Frances Jean Lerner died on Monday, December 8, 2014 at her home in Village Shalom, Overland Park, KS. She was 91. The funeral will be at Louis Memorial Chapel at 11:00am on Thursday, December 11, 2014 with burial in Mount Carmel Cemetery. The... View Obituary & Service Information

The family of Frances Lerner created this Life Tributes page to make it easy to share your memories.