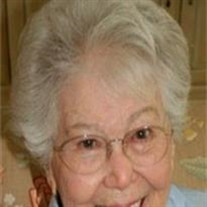 Frances O. Brown (née Becker), 94, of North Branford, Connecticut, formerly of Kansas City, Missouri, died peacefully at her home on September 4, 2013, surrounded by her loved ones. Funeral services will take place at 10:00am Monday, September 9 at The Temple, Congregation B’nai Jehudah, 12320 Nall Ave, Overland Park, KS 66209. In lieu of flowers, the family requests donations be made to the Jacob and Frances O. Brown Family Fund at the Jewish Community Foundation of Greater Kansas City, 5801 W. 115th St., Overland Park, KS, 66211, or online at jcfkc.org. Frances was the daughter of the late Mayme and J.J. Becker of Kansas City; she was predeceased by two sisters and a brother and was the widow of Jacob Brown, an attorney, also of Kansas City; the couple were married for 65 years until Jacob’s death in 2005. Born during the 1918 flu pandemic a mere 26 days after cessation of hostilities in WWI, Frances grew up in Kansas City and graduated from Westport High School in 1935. A serious car accident and the Great Depression interfered with her plans for college, but she attended Kansas City Junior College and took classes at UMKC for years. A prodigious reader, possessed of a quiet brilliance and a quick wit, she instilled a love of reading and learning and a reverence for education through three generations of her descendants and extended family. Frances was a wise and kind mother, mother-in-law, grandmother, and great-grandmother. She and her husband were active for many decades in philanthropy in the Jewish and general community of Kansas City and beyond. She was a member of The Temple, Congregation B’nai Jehudah, as well as a member for decades of Congregation Beth Shalom and a lifetime member of Oakwood Country Club. Frances is survived by both of her sons and daughters-in-law, Michael and Eva Brown and Howard and Edith Brown, of Connecticut; her adoring grandchildren: Gustav and his wife Diajeng Hendratmo Brown of California; Cadence Brown and her partner Daniel Fleming of Sydney, Australia; and Justin Brown of Boston, Massachusetts; and great-granddaughter Aina K. M. Brown.

The family of Frances O. Brown created this Life Tributes page to make it easy to share your memories.