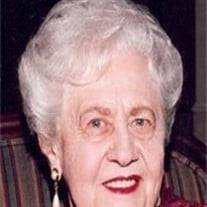 Frieda (Leniower) Pollman passed away peacefully on October 5, 2010 at Menorah Medical Center following a brief illness. Services will be at 11:00am Friday, October 8, in the chapel at Kehilath Israel Blue Ridge Cemetery. Burial to follow. Kindly omit flowers; The family suggests contributions to the charities of one’s choice. She was born in Poland on January 31, 1923, ten minutes before her twin sister, Anna. She and her family, which included Anna, younger sister, Ela and her parents, Abraham and Franciska, survived the hardships of the Holocaust in Russia by working in a cooking oil refinery and distributing quinine in a typhoid treatment center. After the war, Frieda met her future husband, Victor (Wiktor Poloniecki) Pollman, in a displaced person’s camp in Austria. They moved to the United States and settled in Kansas City, MO in 1950, where two uncles (Sam and Milton) and their families lived. Frieda had two sons, Martin (Lynn) Pollman and Arnold (Vicki Stine) Pollman. She was an active partner with her husband in the Pollman Furniture business and with managing multiple real-estate and investment interests. Frieda was a long-time member of Kehilath Israel Synagogue and its Sisterhood, Hadassah, Jewish Community Center, Hyman Brand Hebrew Academy, B’nai B’rith and AMIT Women. She lived at 83rd and Oak for 48 years next door to her sister, Anna, her brother-in-law Chester (of blessed memory, mother Franciska (of blessed memory) and nephew Jack. She spent the past three years as a resident at Village Shalom in Overland Park, KS. Frieda was preceded in death by her parents, Abraham and Franciska (Salomon) Leniower, and by her husband and partner of 37 years, Victor Pollman. Survivors include her sisters Anna Mondschein and Ela Amsterdam, sons Martin (Lynn) Pollman and Arnold (Vicki Stine) Pollman, grandchildren Stephanie (Doug) Levine, Karen (Scott) Bodney-Halasz, Anna Francesca Garcia, Carla (Aaron) Clark, Vaughn Pollman, six great-grandchildren, and numerous nieces, nephews, cousins and friends. Frieda enjoyed watching game shows, listening to music (especially Nat King Cole), and watching The Lawrence Welk Show. She will be remembered for her sharp and feisty humor, her intelligence, her love and commitment to family, her tremendous storytelling ability and her extreme generosity. For how their efforts bettered Frieda’s life, her family wishes to extend their thanks to the Shepherd Center Meals on Wheels volunteers and to the loving caregivers and volunteers at Village Shalom.

Frieda (Leniower) Pollman passed away peacefully on October 5, 2010 at Menorah Medical Center following a brief illness. Services will be at 11:00am Friday, October 8, in the chapel at Kehilath Israel Blue Ridge Cemetery. Burial to follow.... View Obituary & Service Information

The family of Frieda Pollman created this Life Tributes page to make it easy to share your memories.