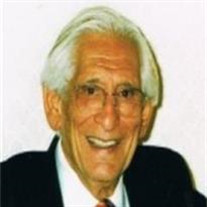 George Kirschbaum, 89, of Overland Park, KS, passed away Thursday, December 9, 2010. Memorial services will be at 3:00pm Sunday, December 12, at The Temple, Congregation B’nai Jehudah, 12320 Nall, Overland Park, KS 66209. Kindly omit flowers; The family suggests contributions to the Migrant Farmworkers Project, 920 Southwest Blvd., Kansas City, MO 64108 or Harvesters International. George grew up in Phoenix and Tucson, Arizona and came to Kansas City to attend dental school. After graduation, he enlisted in the U.S. Navy where he served in the Pacific during World War II. Toward the end of the war, he married Florence Cohen in June, 1945 in San Francisco. They were happily married for over 60 years. He opened a dental practice in Kansas City with his brother Mitchell after they returned from the war. In the early days of his practice, he also volunteered his services at the Alfred Benjamin Dispensary. Over the years, he made many close friendships in Kansas City and raised his family here. George enjoyed being around people and was well known for his sense of humor. In later years, he enjoyed traveling throughout the world with his beloved wife Florence who preceded him in death four years ago. He is survived by two children: Susan Kirschbaum (Walt Stubbings), Leawood, KS and Stephen Kirschbaum, Kansas City, MO; his nephew Michael Kirsch, Prairie Village, KS; niece, Sandra Wyly, Lake Lotawana, MO; nephew John Fromson, St. John, MI as well as numerous other nieces and nephews. The family would like to thank George’s caregiver Sandy Findley for her six years of dedicated service.

The family of George Kirschbaum created this Life Tributes page to make it easy to share your memories.