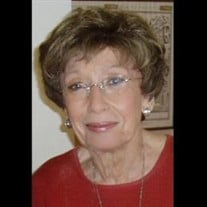 Gertrude Epstein, born April 28, 1929, passed away peacefully at her home on April 29, 2021, surrounded by her family. Private services will be held on Friday, April 30, 2021. Please contact Louis Memorial Chapel for the Zoom link. Gertie, as she was known, was born in Kansas City, Missouri, to Rose (Nelson) and Max Zurovsky. The youngest of three children, she was often teased as the one who started The Depression. When Gertie was only 15 years old, she got her first job working at Sam and Lee Peltzie’s women’s store (Gertie was tall and looked older than she was). She was so sharp that she was promoted to manager shortly after she began. It was in that store that she first met the man she would later marry, Samuel Epstein. Gertie attended KCMJC, where she majored in art and journalism. She married the love of her life, Samuel Epstein, on August 29, 1948. She worked to help put Sam through college to earn his engineering degree. But, as fate sometimes happens, when his father became ill, Sam temporarily took over his father’s kosher business, and never looked back. It takes a unique and special couple to be able to work together every day. Gertie had incredible strength and fortitude. When Sam had a heart attack in 1965, she, along with a single employee, kept the business going for months. She never complained; simply did what needed to be done (Phil Shankman, of blessed memory, brought her sandwiches each day for lunch). In 1968, following the death of Martin Luther King, Jr., the Kansas City riots occurred. At that time, Epstein Kosher Foods was located at 31st and Wayne. Gertie and Sam were working as usual. The police came into the store and told them to vacate immediately as the riots were beginning. However, the police didn’t realize that it was almost Passover, and Gertie and Sam needed to get the Passover orders out. So, after much discussion, the police agreed to help board up their windows and doors to allow them to continue working. Gertie and Sam worked through the night with bullets, police cars, tanks, yelling, pounding on windows and screaming all around them. It was a night like no other the area had ever experienced. When morning came and things had calmed down, the police came to let them out. There was devastation everywhere—but the Passover orders were done! In the fall of 1968, Epstein’s Kosher Foods moved to their 79th and Wornall location. Gertie continued to work there each day with her husband running the backend. However, she was famous for her schmaltz, considered some of the finest and purest you could find. Even while working full time and raising her three daughters, she made time to be a Girl Scout troop leader and cookie chairman, school room mother, USY advisor with Sam, and reading tutor at the HBHA. Following the death of Sam in 1995, Gertie became an avid worker and volunteer for Beth Shalom synagogue. She spent innumerable hours and days with the Kiddush Corp. She also became Sisterhood Gift Shop chairman, making it one of the best in the country, receiving calls from all over. Even at the age of 80, she was flying solo to New York City to attend the Gift Show to bring new and exciting items back to Kansas City. In 2007 Gertie received the Beth Shalom Kovod Award, Beth Shalom’s highest honor for service to the congregation. Gertie was a life member of Hadassah, the Hyman Brand Hebrew Academy Auxillary, Beth Shalom Sisterhood, Prayerworks, and Friends of Sheffield. However, Gertie’s greatest accomplishments, were her children, grandchildren and 16 great grandchildren. She was considered “Bubbie” to her grandchildren and “Big Bubbie” to her great grandchildren. She was the kind of grandmother who never missed a sporting event or school play. She even had the distinction of writing a letter every single day to each grandchild when he or she was away at summer camp, never missing one. And she did it every year they attended! She was idolized and loved by all who knew her. Gertie was preceded in death by her parents, husband, Samuel Epstein, Sister, Frances (Harold) Sandhaus, Brother, Jack (Sylvia) Zurovsky, sister/brother in-laws, Sylvia and Sam Beiser, brother/sister in-laws, Isadore and Rachel Epstein. She is survived by her children: Sharon (Stuart) Pase, Debra (Mickey) Faigen, and Roberta (Brian) Miller. Grandchildren: Rachel Pase (David) Sosland, Maayan Pase (Gil) Hoffman, Josh Pase, Adam (Liat Rosen) Pase, Alexa (Scott Aversano) Faigen, Zachary (Sheli Reynolds) Faigen, Eli (Tamar) Miller, and Hannah Miller (fiancé Daniel Mendelzon) Great Grandchildren: Shlomo, Ethan, Netanya, Gabrielle, Jake, Devarya, Shai, Juliet, Sivan, Lior, Rex, Wesley, Julian, Eitan, Yair, Leora. The family thanks her caretakers for the wonderful love she was shown through the years. The family asks that in lieu of flowers, contributions be given to Beth Shalom synagogue (bethshalomkc.org), Hyman Brand Hebrew Academy (hbha.edu), Jewish National Fund (jnf.org) or the charity of one’s choice.

The family of Gertrude Epstein created this Life Tributes page to make it easy to share your memories.